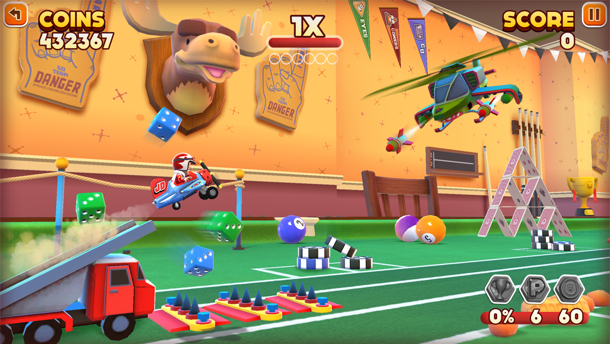 Developer Hello Games made some major waves a few weeks ago when they debuted their upcoming persistent sci-fi exploration game No Man’s Sky during the VGX awards but fans who might be worried that they’re leaving the Joe Danger series behind need not fret any longer as a new iOS title, Joe Danger Infinity, is coming very soon.

Infinity will blend the traditional Joe Danger stunt riding gameplay with the endless runner mechanic seen in many other iOS games. Playing as Joe or as one of the game’s other 20 playable characters, players will work their way through a series of levels and challenges all based around the story of a magical gumball machine that brings toys to life; meaning that instead of cities and movie sets, this time players will be racing along bedroom floors and pool tables.

Hello Games isn’t quite ready to confirm when exactly Joe Danger Infinity will be available or what it will cost. They can however confirm that they’ll continue to support the game post-launch with content updates that will add in new levels, characters, and vehicles.