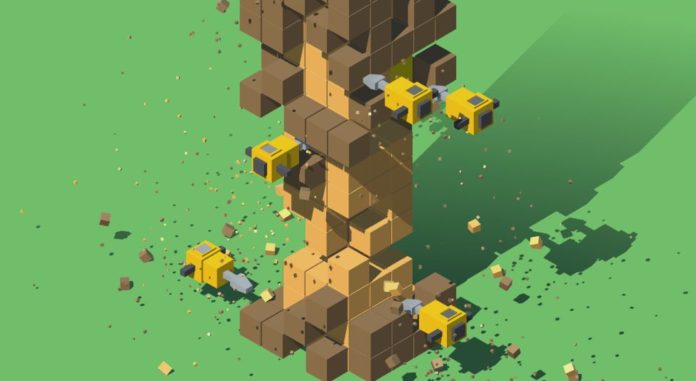 Jackhammer Tower is an extremely popular idle clicker game from Voodoo with a single major problem: the ads which are more annoying than anything I’ve ever seen – or seen recently. However, we’re going to brave this out and share with you some Jackhammer Tower cheats and tips that will help you get more money quickly and unlock the next towers faster.

Yes, there is not much to do in this game and the lack of depth is surprising for the game’s popularity. You actually end up spending more time watching ads instead of playing the game – and I am actually surprised to see that people manage to deal with this. So if for some reason you really enjoy playing this dull game, probably the best investment you can make is in the “Remove ads” option. Unless you have nerves of steel.

But let’s leave these behind and let’s see what else can be said about Voodoo’s latest game in our Jackhammer Tower tips and tricks article.

Focus on getting the Jackhammers
Of the upgrades that you can buy, focusing on getting more Jackhammers is the best idea if you want to get over the towers faster. However, the prices increase at an alarming rate so you will actually have to try and find a balance (but always start with the Jackhammers).

The upgrade order that I recommend to do until you can’t afford to buy anything else is: Jackhammers, Power, Marketing, Speed, Gold price and Gold Cubes. This way you maximize earnings and speed up tower destruction as much as possible.

Careful when choosing the Boosters!
You can watch ads to get one of the two boosters: Fat Booster which increases speed and earnings for 3 minutes and the regular Booster which only doubles earnings for 1 minute. There is absolutely no point to get anything than the Fat Booster if you really want it because, well, you have to watch the same amount of ads for either and it would be silly to go for the one that gives you less.

I really have no idea why there are two options and why would anybody believe that somebody would be stupid enough to choose the worse reward.

Also, in order to make sure that you actually get your minutes worth, always activate a booster before completing a set of 5 towers. Otherwise, you will most likely be forced to watch an advertisement after obliterating the 5 towers and the time you spend forced watching the ad will be taken away from your booster’s time. 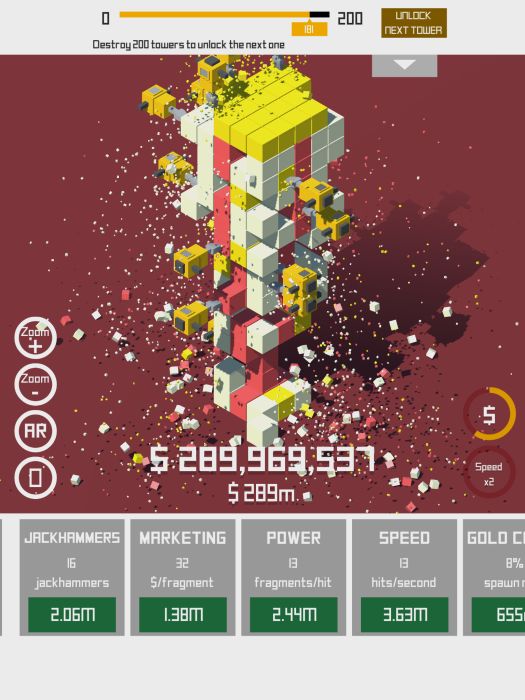 Always double your earnings
In 90% of the cases, after destroying 5 towers and hitting the “Sweet” button, I am forced to watch an ad. This is the reason why I decided to always watch an ad and double the earnings – at least I gain something in return. It’s not much, but at least it’s not nothing either.

Unlock new towers
There’s just one way you can unlock new towers, one at a time: destroy the required number of towers in order to unlock them. You actually have to press the button, so even if you destroy 5,000 towers and you only need 200, you’re still not getting the new one unless you tap the button. So make sure that you do.

How to change towers
Unfortunately, you have absolutely no choice when it comes to what tower you’re getting next and it’s all random. The larger towers are better because they reward you with more money, but the smaller ones are faster to destroy.

You can speed up things a bit by tapping the screen like crazy, but you can only double (at most) the speed of your jackhammers so that’s not really worth it. There are much better things to do with your life.

AR Makes no difference either
The game has the option to be played in AR, but that chances nothing either. Instead of the colored backgrounds, you get to play on a background of your room. Good for some extra diversity, but not a game changer so not really worth it, especially since the battery seems to get drained a lot faster when playing in AR mode.

Turn off your internet!
I rarely recommend this because I know that advertisements are what help free to play developers pay for the bills and the staff. But I’ve rarely seen a game with so many ads that offer so little in return. It’s infuriating and frustrating, but fortunately there’s an easy method to get rid of these.

Simply turn off your internet connection. This will allow you to still play the game, but you won’t be forced to watch ads every 5 towers or so. Of course, this means that you don’t have the option to get the boosters or double your income after 5 towers (or after a longer break away from the game), but it’s something that’s really worth it in my opinion.

Alternately, if you really like the game and you want to support its developers, you can purchase the “Remove ads” option and still be able to play the game with your internet on.

This would be everything we have to share for Jackhammer Tower. This game lacks depth and fun and is more annoying than anything else. But if you enjoy playing it and watching jackhammers take down random towers for no real reason, hopefully the tips above will help you a bit.