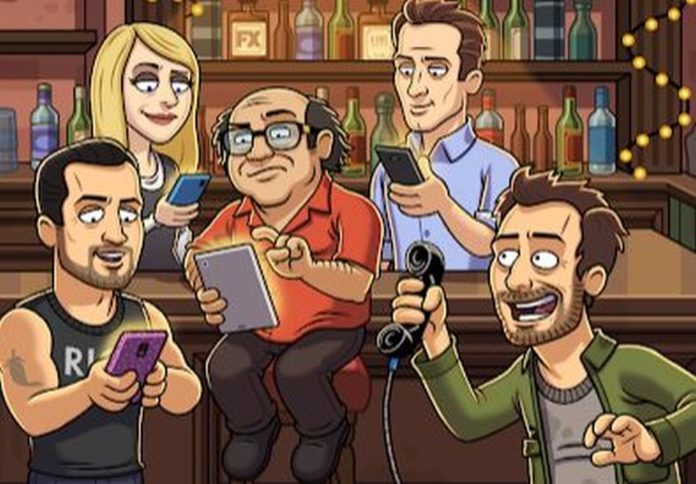 In today’s article we are going to share with you all of our It’s Always Sunny tips and cheats that we gathered so far, to help you make all the right upgrades and make all of your money investments pay off really well!

If you like fun games with a very comical story (while stile a little repetitive), this one is definitely going to be a blast, because it’s not only got super funny characters, but also a great style to showcase that, with lewd jokes and adequate graphics. I don’t want to spoil too much, so I will only say that the game has kept me entertained for as long as I had it open – it’s just that fun!

So even if it’s a kind of an idle game in the end, with you having to collect tons of money for various upgrades (which can be done mainly by waiting and saving up), there are a ton of things to learn about the game and how to do them right!

So, without further ado, let’s dive right into the It’s Always Sunny tips and tricks to help you get more rich, right here below!

The upgrades in the game can start off slowly, and then once you collect enough resources to make more, you can go ahead and upgrade even more! These upgrades I am referring to here are the cards that give you various bonuses when upgrading, and require Beer for that.

You can find these cards in the “Schemes” and “The Gang” tabs, and I think that you should definitely save your Beer for these upgrades, since they are going to allow you to automate your money pickup and increase your income overall.

Learn what the cards bonuses give you & start automating!

Now you should pay close attention to what the cards give you when upgrading,because these upgrades can be really good, or not that much worth it early on. For example, you should first make sure you save Beer to level up your Gang cards to level 2, because that will let you automate.

To Automate, you need a character’s card at a certain level, but depending on the Episode, you might need a different one! Basically whenever you upgrade a Gang card (character card), you will get two things: increased profit from the scheme and increase the character’s power!

Now the Support cards affect only particular schemes, and they are a little more difficult to find, but they are super useful! So whenever you get some, keep and eye on what they require to upgrade them!

The Crystals will let you buy Crystal Barrels in the store (1 Barrel costs 1.00k Crystals), which are a good source of Beer, random cards and money. You can get more Crystals by selling the cards you don’t want, or burning.

Once you upgrade Dee cards,you will increase the Crystal Power, which will help you gather more Crystals every time you burn a card. I suggest that you burn the cards that you have extra, because it’s a good source of Crystals. Also, try doing this later on in the game, since in the early game it’s not really needed that much.

Don’t finish an Episode right before closing the game!

If you want to close the game and go out for example, there is this thing that I really suggest you don’t do – finishing the Episode.

Well, you might think that “OK, let’s finish the episode and I’m done playing for today”, but in reality it’s better to keep your goals’ rewards uncollected, so that you don’t complete the episode right before you go out.

This is good because whenever you start a new Episode, your Cash, Customers and all the get reset, so if you don’t complete the Episode by putting out the Dumpster Fire, you don’t reset it and you can keep claiming money.

Basically what you should do is just keep your schemes upgraded as much as you can, and claim the free money when you get back into the game!

Complete the Goals and missions all the time

In the top side of the screen you will see a bunch of missions, which will ask you to either spend some Beer, collect stuff, and various other stuff. These missions, once completed, will add up to your Goals, and that is super good because you need to complete Goals in order to finish Episodes!

I suggest that you try completing missions as much as you can, because whenever you complete one, you will get a reward which can be either money, cards or Beer. This is a good way to earn resources, especially since you will be looking to make upgrades.

Try completing as many missions as you can before ending the Episode, especially if you are having a good profit streak and plenty automations activated.

Every 4 hours in the game, you will be able to collect a free Alley Barrel which contains a ton of goodies: cards, beer and money! It is just like the Crystal Barrel, but with slightly less good rewards.

I suggest that you check back the game periodically so you can claim these free goodies – even if you get some bad cards that you don’t like, you can then sell them for Crystals and it’s still worth it!

Upgrade the most profitable scheme first!

This is a trick which is going to help you lots! Whenever you are having multiple schemes active, or whenever you unlock a new scheme, start focusing all your money into it because it will bring the most profit.

For example, at Episode 5 I have the first Scheme, “Electric Dream Machine” at level 188 and it gives 27.07M per 10 seconds, while the “Gas Crisis” scheme at level 75 gives 228.15M per 40 seconds. Even if it’s not the last one there, since the last one is “Deal Stuff”, it’s definitely way more worth it to invest into the later schemes than the earlier ones, even if they aren’t automated yet.

Therefore, even if it’s just a few customers (levels) that you can add to your latest scheme, make sure you do it because the profit will be way higher. Always upgrade the more profitable schemes first, even if they cost more – remember that!

Watch an ad to get free Beer!

It might not come ice cold and served at your doorstep, but the in-game beer is pretty useful too (as you might’ve noticed from everything that we mentioned thus far)! You will sometimes see in the top right side of the screen an icon with a beer, which will open a pop up when you tap on it.

The pop up will ask you to watch a short ad and receive some Beer, so I definitely suggest that you do it whenever this option is available, because you will not regret it! The extra Beer will come in handy when you want to make various upgrades, so go ahead and watch the ad because it will only take 30 seconds at most, and any Beer is good beer in It’s Always Sunny!

Get double profits all the time!

Now another cool feature this game has, is that it will allow you to get double the profits! In the top left corner of the game screen you will see a small TV icon. Tap on that and it will let you watch an ad to double your profits for 4 hours.

This can stack quite a bit, so you can watch multiple ads and stay worry-free in terms of money even if you go offline – the game will keep making profit for you, and even double it!

Since all it takes is watching a couple of ads, make sure you do this while you are in game, and even if you leave the game afterwards, the profits will keep coming in doubled!

These would be all of our It’s Always Sunny tips and tricks that we have for you right now! Do you know some other cool game tips and strategies you would like to share with us? Leave them down in the comments section below!