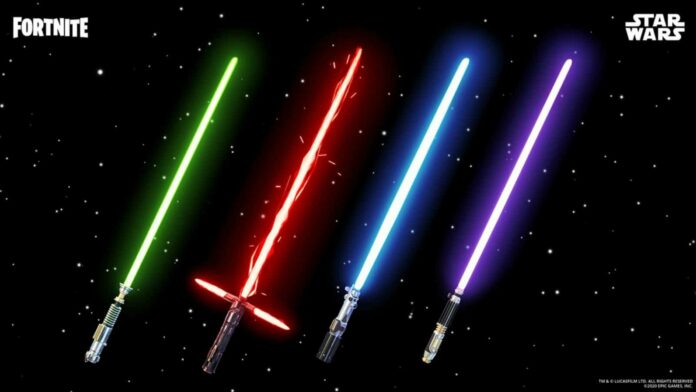 Like many of its famous collaborations with other popular franchises, Epic Games is about to make Star Wars fans excited once again as it is reportedly bringing Lightsabers back to the game on May 4, 2022.

May 4th is not only the day in which Star Wars is celebrated, but for the Fortnite community, it could also mean a day where they get to witness the return of the famous Lightsabers to the acclaimed battle royale game.

Lightsabers first made their way to Fortnite in Chapter 2 Season 1 as Mythic weapons, and even though they were heavily overpowered back then, it didn’t stop fans from loving them.

Various leaks and rumors have reported that Epic Games is planning something major on May 4th which is likely going to be the return of Lightsabers. Since May 4th is the big day for the Star Wars franchise and its fans around the globe, it’s the perfect occasion for Epic to bring back Lightsabers, as well as Imperial Storm Trooper NPCs to the game.

The leak also revealed that the game’s next Chapter 3 Season 2 update should arrive on May 4th, and it shouldn’t exactly come as a surprise if both Lightsabers and the Imperial Storm Trooper NPCs make their way back to the game.

This isn’t the first leak that prompts the return of the Lightsabers as the leaks have been around since about a month ago, and fans of the Star Wars franchise have been ecstatic ever since.

With Lightsabers, players can deal up to 45 damage in Fortnite and can also block incoming bullets, which is simply fantastic.