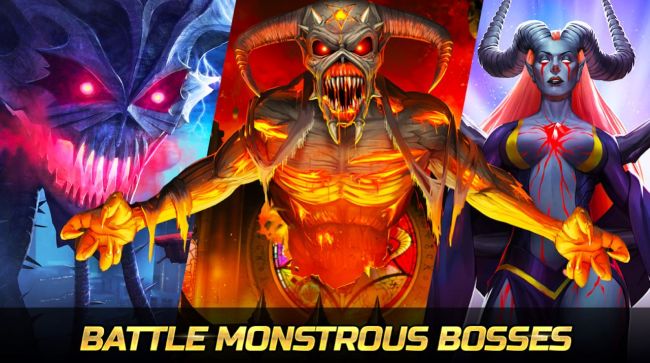 In today’s article we are going to share with you all of our Iron Maiden: Legacy of the Beast tips and cheats that we have gathered so far and help you become stronger than all of the enemies that lie ahead!

I have to admit, being a little biased towards Iron Maiden I have come to love this game quite a lot – and not only because it is a game, but also because of its absolutely amazing soundtrack (as you might’ve expected otherwise)!

And since you came here to learn all the Iron Maiden: Legacy of the Beast tips and tricks that we have in store for you, then let’s not waste another second and dive right into them, shall we?

Play through the normal stages

At the very beginning I suggest that you rush through the game’s first stages because these will walk you through pretty much everything that you need to do and learn, and also help you level up quite a little bit.

If you want to unlock all of the game’s features then I suggest that you start playing the very first chapter ASAP and then move on to the next one. That way you will unlock all the features of the game and also won’t have to worry about pretty much anything.

As soon as you have unlocked Kingdom of the Sands you will have completed the first “chapter”. That’s when you will have everything pretty much unlocked – at least the main important things. So I would suggest that you just run them as fast as possible, then once you’ve got some better characters you come back and finish the stages on 3 stars.

Complete the stages on 3 stars

After to have played a stage for the first time, you will be able to receive a reward – well, this reward is much better for completing the stage with 3 stars. That is, because once you have completed a stage on 3 stars you will have some extra rewards as well!

So I suggest that even if you don’t complete a level with 3 stars from the very start, once you have put together a strong team, you come back and re-play the stages which you haven’t finished with 3 stars and get the complete reward.

You can see your progress in the upper left corner of the screen – there it will say how many stars you have acquired out of the maximum amount per each stage!

Learn how to win all battles

The battle mechanic is pretty simple at first sight, but once you advance through the stages it will get more and more difficult. That is because every battle gets progressively more difficult and you need to improve your characters in order to win in the long run.

But apart from improving your characters (which we will dive into more detail below) there are a few other tips which will help you win the battles much more easier. Here they are:

– Eddie must stay alive! Because he is the main character in this story, and if he dies at any point during battle, then you’re automatically defeated!

– Every battle uses Sands of Time which is the equivalent of Stamina. That means that if you run out of Sands of time, you can’t play the stages any further and will have to wait until they replenish again.

– After each battle stage your team will slightly heal, but don’t rely on this alone to keep your Eddie alive.

One of the safest ways to win any battle is make sure that Eddie stays alive. That can be done by either having a good healer unit, or by swapping him out for another unit if his health is in danger of running out.

You can swap Eddie or any other unit by tapping on it and replacing him with another unit which is healthier. After swapping you will have 2 turns of cooldown before you can swap again. So I suggest that you think carefully when you want to do it.

Play with 3x speed and Auto

If you are still at the early stages of the game, then you should play by using Auto because it will automatically attack the enemies for you. That is also going to make things a lot easier if you have some other things to in the meantime.

Tap the screen at the right time

When you are attacking with any character (while not having Auto mode on), you will have a window of a couple of seconds when you can tap on the circle that appears on the enemy. When you tap it, the attack will deal extra damage.

If you tap it and get a “Good” result, then it will not deal as much damage as it would if you got “Perfect” when tapping at the right time. If you tap the circle at the right time (get “Perfect”), then your attacks will deal an additional 25% damage or so, which is quite a lot especially if you are up against some bosses!

Every character that you will get can be upgraded – first in level, then in stars. That will make them more powerful and thus increase your team’s chances of winning every single battle. I suggest that you start upgrading your best characters first, as they are going to do most of the work.

So if you have to choose between upgrading a 2 star and a 3 star character, then definitely choose the 3 star one first! In my opinion you should upgrade Eddie too as much as you can, as that is going to have a pretty big impact on the team and you want him to srvive for as long as possible.

Level up your characters

You can level up your characters by using shards to give them some extra EXP. Characters also gain EXP from the battles, but if you want to speed them up by quite a bit, then make sure that you give them shards!

You can give green shards to green characters, blue shards to blue characters and red shards to red characters for bigger increases, but they are not limited to colors. However, it’s best if you stick to the selected color because that will give a small boost when using them.

After a character reached maximum level (let’s say for example level 20 for 1 star heroes, 40 for 2 star heroes and so on) you will be able to Evolve them. That will add another star and let you level the characters up to the new level cap which has increased.

I suggest that you make sure to evolve Eddie first because you want him to be one of the strongest characters on the team. But of course, if you get a stronger 4-5 star character, you should invest in them because they will carry you.

Equip talismans right for your characters

As you might have already noticed, the characters will have a color which is basically their “element” (go with me on this one). Each of the characters can equip talismans of the same color as their element, so when you have a few good talismans you should equip them to your best matching color characters.

For instance, after the tutorial you will see that Eddie will get a talisman set (2 talismans which form the same set) which gives him a good bonus of +15% ATK. Try to always equip the right talismans because some of the bonuses you get will make quite a big difference and empower your characters.

To unlock more Talisman slots you will have to Evolve your characters! So a 1 star character will not be able to equip 6 talismans – you will need to star them up in order to equip more!

Every single day that you log in to the game you will be able to claim some free rewards which will come in handy. Try to log in and claim them even if you don’t plan on playing the game that particular day, because the rewards will add up and you will use them when you do decide to play.

There will also be some limited time in game events, which you can claim also for simply logging in, so try to take part in them because some of the rewards are unique to this and they will definitely be useful.

When you are on the game’s main interface you will see in the upper right corner of the game that you will receive a new mission each time you complete one. They are going to give you some useful rewards, so make sure that you try and complete them whenever you can.

You can claim useful rewards, such as Talismans and exp shards, so try to complete them if you are not sure what else to do next in the game.

These would be all of our Iron Maiden: Legacy of the Beast tips and tricks that we have for you right now! Do you know some more useful game tips and strategies to win more battles? Feel free to share them with us and the other players down in the comments section below!