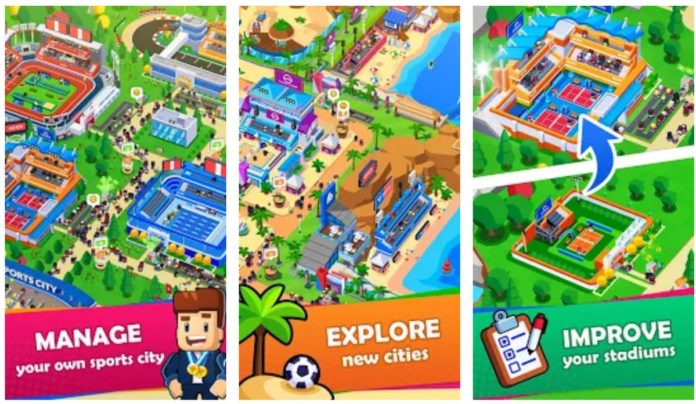 This way, you will know that you’re playing the game as you should, maximizing profits and making it as easy as possible to get to the next stage. You will learn today how to play the game, how to handle upgrades, how to unlock new areas and everything else that you need for a flawless experience.

So let’s not waste a single second and instead let’s check out below some Idle Sports City Tycoon tips and tricks!

How to handle upgrades on each court

Each venue has three different upgrades that you can purchase: the stadium (which increases the coins generated per minute), queue upgrades so more people can wait in line and the seating capacity.

The last two are more expensive a bit more difficult to purchase, while the first one should be your main focus.

You still have to find a balance when upgrading these: you can’t just focus on improving the stadium only and have very little seats and a short queue. I would say that as soon as you see that people start leaving because they have no place in the queue, upgrade it, then upgrade seating as soon as you afford it.

It’s not easy to see how these two upgrades (queue and seats) affect your income, but they do increase it no matter what. Just that you won’t know by how much before doing it and unfortunately the game won’t show you the exact effects in the venue’s screen, where the Earnings are shown.

But if you look at the income per minute in the top left corner of the screen, you will see that the number will go up when you purchase one of these upgrades.

Each venue that you have unlocked in Idle Sports City Tycoon can be upgraded indefinitely. And even though it doesn’t make sense to keep upgrading the ones bringing little profits, you should in order to reach the level milestones

When you do so and upgrade a stadium to level 25, 100, 200 and so on, you will greatly increase the profits generated, but also earn some premium currency and most likely complete an achievement for even more rewards.

So always upgrade having the next milestone in mind: you know that once you reach it, you will get a nice boost to your income, making everything easier in the game.

The last stadium that you have purchased will be your biggest money maker, no matter what. Therefore, always start by upgrading it first. This way, you will make sure that you always get the biggest boosts to income.

From there, move backwards with the upgrades. It rarely makes any sense – at least from a financial point of view – to upgrade the first stadium when you have the fourth or fifth unlocked.

Don’t forget about the Entrance Gate!

With so many things happening away from it, it’s really easy to forget about it. But it is equally important to the well being of your sports complex even though it doesn’t directly affect the income (at least not by much).

Make sure that you open new gates, especially when the queues start to get longer and longer and people are not able to get into your complex. New gates are the most important and I always say that it’s better to have more than less – so keep that in mind!

Also, invest in reducing the waiting times when people are in line. These upgrades are very expensive, but they indirectly help your profits grow by simply allowing more people to get in and spend their money for you.

Keep achievements in mind when upgrading

As I said earlier, it makes little sense, after a point, to invest money in upgrading the lower tier buildings that you have. However, you should still do it for completing achievements.

Even for the lowest tier building, you will still have achievements rewarding you with premium currency when reaching a milestone. So make it a habit to keep an eye on these requirements: once you manage to upgrade a bit and keep things rolling nicely, you will have a really easy job to reach the next milestone for grabbing the rewards.

Tip: Simply tap and hold the level up button in order to quickly buy new levels. Saves you a lot of clicking!

Save up and invest in Epic Upgrades

Epic upgrades are purchased with Premium Currency, so they are extremely valuable. They are also very expensive, so you shouldn’t spend those coins on anything else (especially not on those “deals” that give you money for premium currency!).

Due to the price constraints, you won’t have a lot of freedom to invest in those Epic Upgrades. Most likely, you will just buy whatever you afford – but do focus on those upgrades that directly affect revenue first, and others later.

Collect from all the nearby kiosks

Scattered around each city, you will have varous kiosks that will generate some money for you every now and then. Tap those as soon as you see the dollar bill icon above them: they won’t give you much, but every little bit helps in this game!

Grab some money from the VIP rewards

Watching ads to progress faster in Idle Sports City Tycoon is the way to go! Every now and then, you will see an yacht coming into the port and a VIP golden button appearing to the right side of the screen.

Tapping it will allow you to get some free money, as long as you are ready to watch an ad. But there’s a trick to make this value increase – and it also involves watching ads.

Tapping the loudspeaker icon in the bar at the bottom allows you to watch an ad to double your income for an hour (up to six hours at a time). Make sure to do this. VIP rewards are based on your current profits – so the more money you’re making, the more the VIP ad reward will give you. Easy money!

Even easier money comes if you watch an ad after being away from the game for a while. You can earn up to 2 hours of offline income – a bit more if you invest in the Epic Upgrades.

Either way, you will still have a really large chunk of money after being away, usually more than any VIP ship will offer you. Therefore, make sure to always double that income: it’s the best ad deal that the game has to offer.

How to unlock new areas in the game

Unlocking new areas in the game is similar to the prestige options that most idle games offer. You basically start over in a new city, with new stadiums to upgrade and even more money to be made.

In order to go to a new area, all you have to do is buy all the venues in the area you’re in and collect enough money to afford purchasing the new one. Fortunately, you will only need regular coins for it, so you’ll get there sooner or later.

Once you have the resources available, simply tap the map icon in the bottom center of the screen and select the next stadium. At the moment of writing, there are two more areas to unlock: Summerville and Snowland, but more will be released in future updates.

This would be all for the Idle Sports City Tycoon guide today. If you have additional advice for fellow players, don’t hesitate to leave a comment below and let us know.