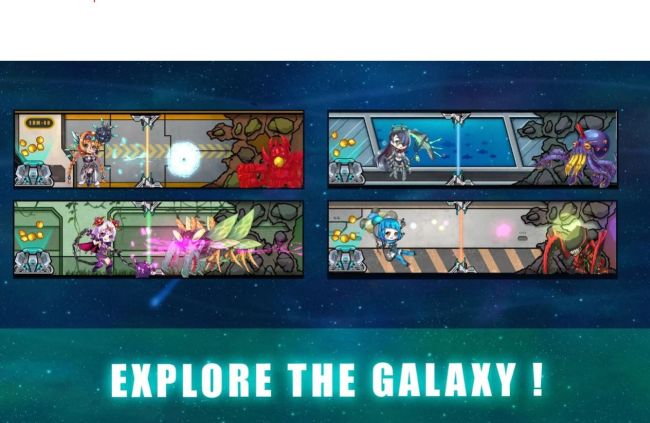 In today’s article we are going to cover all of the Idle Space Farmer tips and cheats to help you become the best space farmer, and tell you everything that you need to know about the game – from making all the right upgrades, to obtaining more heroes and upgrading them.

Now I have to admit, the game’s graphics are not exactly the most family friendly ones, as the characters have… a lot of character to say the least. But putting that aside, there are some fun features that the game has and since it is an idle game, they will eventually be achieved!

But enough with the introductions. You came here to learn all of the Idle Space Farmer tips and tricks, so let’s not waste another second and dive right into them right here below!

Start making all the upgrades

There are quite a lot of things which can be upgraded in the game, and you should start working on them as soon as you dive into the game because they will help you gather a lot of gold early, which is good for making upgrades.

The upgrades are, as follows:

The game’s Elevator will carry the gold that the agents are mining out of the monsters. The upgrades will give the Elevator the following boosts:

– increased speed of moving through the levels

It is super important that you upgrade the Elevator early on because the more levels you unlock, the faster it should be moving through the stages and gather the gold collected. I suggest that you try to upgrade the Elevator to like levels 40-50 because early that will be one of the best speeds in my opinion.

The Bank in game will store up Gold, which is good for making upgrades. It will also increase the number of transport vehicles that you have there, so let me tell you what the upgrades will give:

This can be your second big upgrade focus, because it will also affect the quality of the Elevator (the Elevator brings in more resources -> you transport them faster). That is a good way to make the gold loads move faster, so it’s entirely up to you how you want to approach it.

The Agents are basically fighting the monsters, and each Agent is assigned to one floor. They will battle the monsters and gather Gold from them, so the upgrades that you make for each Agent will boost the following:

Basically all of these upgrades will give you damage boosts, so it’s good to upgrade them as you progress through. I suggest that you make all of the upgrades somewhat equal to all of the Agents, because with each upgrade milestone reached you will receive Super Cash.

The farms can be unlocked by using Gold or Super Cash, but I don’t recommend that you spend your Super Cash on this, so try to use only normal Gold for unlocking more farms. Basically every time that you unlock a new farm you will also receive a gacha summon ticket to call forth a new 1-2 star Agent for free.

This is super useful, as you don’t really have to worry much about getting new Agents with your own currency. Well, it’s of course much better to get new Agents by using premium currency, because then you can call forth much better ones.

Either way, for start just focus on unlocking as many Farms as you can because even if you take a lot of time to clear them, you will eventually and they will give plenty of Gold. So invest your early Gold in unlocking more farms to make more money.

Save up Super Cash for premium Agents

There are three types of gachas in the game, each giving you different quality agents. The better agents will deal more damage and have overall much better stats. So you can’t really compare a 2 star Agent with a 4 star Agent, because obviously the 4 star one is the better.

So how do we use Super Cash for better Agents? Like this:

You can also use the Super Cash for the 3-6 star gacha summon, but that is too much of a game of chance to me, so I suggest that unless you want to spend 500 Super Cash and end up with 5x 3 star Agents, then it is not really worth it in my opinion (of course, if you are super lucky, then you might even get 5x 5-6 stars with 500 SC).

Use the free tickets

The free 1-2 star Agent tickets should always be used, because you receive them for free whenever you unlock a new farm. It should definitely come in handy, as if you already gathered some 1 star agents and have some free 2 star ones, then you can replace them with the better ones.

There are some free daily rewards which you can claim daily, so if you want to get free Super Cash and various chests, all that you have to do is simply log in to the game every single day. Even if you don’t plan on playing that particular day, you can still log in and claim these rewards!

So make sure that you do that by heading on to the option in the left side of the screen and sign in to claim the free loot!

This is yet another option which is going to make things a lot easier for you in the long run. By watching an ad to activate the 2x boost you will basically receive the rewards doubled, so it’s a quick way to gather gold.

I suggest that you always have this activated because it will stay on for quite a long time, even if you go idle (or offline). You can activate this by tapping on the Boost icon in the middle-bottom side of the screen, and there you can choose to watch an ad in order to activate it.

You can see the time left on your 2x rewards by checking the timer next to the Bank in the top level of the farm.

This section here will let you unlock some special areas of the Spaceship, which will give you various boosts.

You can find this in the World button in the bottom right corner of the screen, then head on to the Spaceship menu. There you can find various fields open, which you can activate by paying some Gold, and then to instantly activate them you can watch an ad or wait for 1 hour.

I suggest that you open some of these fields, possibly all of them as soon as you have unlocked 7+ farms which will give you income constantly. That will make it pretty easy to unlock more areas in the Spaceship.

When you are playing, you might notice that the Agents have some active skills which will boost their damage. You can activate these skills manually by tapping on the skill icon next to the Agent, or by heading on to the Farm Overview button in the bottom right side.

There you will find the Activate button which will give you the option to use all of the Agents’ skills at the same time, so if you want to use them all at once, this is the fastest way to do so.

Like the game title says, this is an idle game. So not all the upgrades will go from 0 to 100 in a couple of minutes from playing. So if you want to really turn the game into a profitable space farm, you will have to go idle to save up money.

So once you spent all the cash on upgrades, simply go idle for a little while and let the game collect more money for you, then come back and make more upgrades!

These would be all of our Idle Space Farmer tips and tricks that we have for you right now! Do you know some more useful game tips and strategies? Feel free to share them with us by leaving them down in the comments section below.