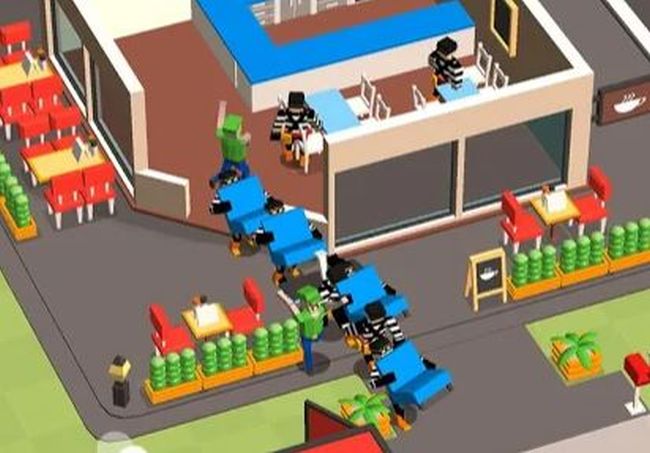 Today we are going to share with you all of the Idle Robbery tips and cheats that we have gathered and tell you everything that you need to know in order to become the best robber (to make it clear – in game robber!).

So while the entire game revolves around you being a tiny little robber and trying to score bigger hits, there are quite a few things to consider when robbing so many places. Well, for one, the speed is quite important! So you will need to make plenty of upgrades int he game and hire more help to clean things out faster!

Therefore let’s not waste another moment (because every second means money in this game) and let’s focus on what you came here to learn – the Idle Robbery tips and tricks!

There are three main upgrades which you can make in the game to speed things up a notch and to make robberies run much smoother. I will cover what each one of them gives so that you can upgrade them in the right order:

– Strength: your men are much stronger and thus they are able to lift much heavier items which will bring in a bigger profit.

– Speed: your men are moving much faster, which will bring in more money in the long run, because they are hauling in stuff quicker. Make this your number one priority.

– Crew: this will allow you to hire more people to help with clearing things out It is a super useful thing to upgrade because the other members will also benefit from the upgrades, so try to level this up whenever you have enough money as it is one of the best upgrades you can make.

In my opinion the best things that you should focus on are the Crew and the Speed, and lastly the Strength. The crew will help a lot because the more men you have working for you, the more items you haul in. So it’s definitely something worth investing in even if it costs a lot.

Level up and collect 3x the money!

When collecting certain amounts of money you will be able to level up, which will give you even more money in return. I suggest that you always level up whenever you have the option available in the top right corner of the screen.

Another thing which you should do because it will give quite a lot of money, is to watch an advertisement to triple the amount of money you receive when leveling up. This option gets better and better, the more you level up, because the money rewards are getting higher.

Accept the limited offers that pop up

There will sometimes be some limited offers which will pop up on your screen, offering you either more money for the hauled items, faster men, or even give you a new crew for a limited time.

I suggest that if you want to speed up the robbery process, you watch an advertisement to claim these offers because they can be super useful and they will increase the profits you make overall in the game.

The offers can get overwhelming I have to admit, so if you are not up for watching an ad to get these boosts, then don’t worry – the game will progress through anyway!

There are also this thing called specialists in the game, which will give you various boosts depending on the ones you choose to hire, but they will cost Gems (premium currency). So it’s entirely up to you if you want to spend your Gems to hire them, but they will speed things up and give you more money

There can be one Specialist hired for free, and 2 more by watching advertisements to open up 2 slots, which will let you hire 2 more. They each give different boosts, so try to think about it well before you hire the cheapest one.

Also, I would suggest that you don’t hire them at the very first robberies, because they might be good, but they will not go through to the next place. So it’s really not worth spending the money for the early places such as the House and Cafe.

There is this super useful offer which will appear in the upper left side of the screen, which will let you choose between 3 cards each containing Gems. Try to play this mini game because it is super useful and you might get the 20x Gems with just a tap.

This game will make it much easier to hire the Specialists in the later stages, so try to play it as many times as you can every time it will pop up on your screen. I think that as a f2p player it will be worth it.

You can see the location which you are currently robbing in the upper right corner of the screen, when tapping on the location pin. There you can see the current progress that your men made for your current location so try to keep this in mind.

Another useful tip if you plan on hiring specialists: don’t hire specialists when a location is over 50% cleared. that will not really be worth it, so try to not waste your Gems on them in such situations. That’s when this progress tracker will come in handy!

The in game achievements are another pretty useful way to get more Gems and money, and most likely you will complete a lot of them in a fairly short amount of time. I suggest that you give them a quick read so that you can know what tasks you can complete in order to claim them.

When you go offline in the game, your men will keep progressing and robbing places. That is when you can choose to go idle and just let them mind their own business. Once you return to the game you will be able to claim offline rewards and use the gold that the men gathered in order to make more upgrades.

Ideally you should go offline when you notice the game progressing slower and slower, because eventually the men will get the items and make money. I suggest that you always claim increased rewards when you log back into the game after being idle, because it will help you gather more money for the upgrades.

Make upgrading the crew a priority

I know that I mentioned this above, but you should definitely try to make the crew 20/20 ASAP because it will help you clear places out so much faster. The upgrades in this field will take quite a bit, so try to be patient and not spend your gold on the other upgrades too much.

What I mean by this is that you should do the other upgrades as well, but focus on the crew mainly. So make the Crew 20/20 first, but in the meantime you can also upgrade Strength to level 15 or so and Speed to level 20-ish.

A robbery can’t be done over night! Well, it can – but not in this game. Here you will need to have patience while the men are gathering all the items, from trees to pumpkins and sofas. So what you need to do is wait until they are finished. It is an idle game afterall, so it’s not like there is a ton of things that you can do other than watch ads to speed things up and make it so that your men are looting faster. So have some patience!