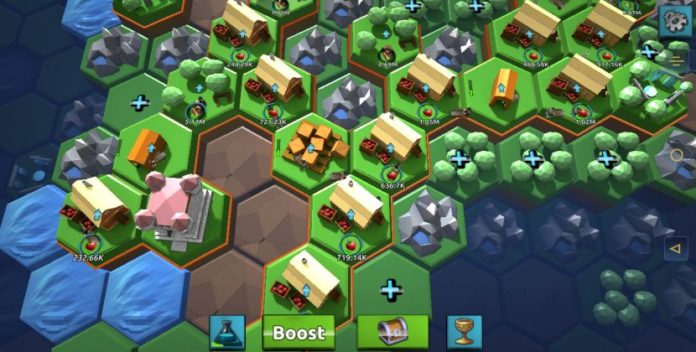 Idle Kingdom Clicker is one of the more addictive idle games that I have played recently. Yes, it’s an idle/incremental game despite the “clicker” in its name.

Today, I am here to share with you a bunch of Idle Kingdom Clicker tips in our guide for the game: you’ll learn when to reset your world and start over, how to optimize tile purchases and placements and much more: everything to help you progress through the game faster and unlock the extra worlds ASAP.

It won’t be easy: you’ll need to play a lot, actually, but at least it’s a fun thing to do. So let’s see how to optimize it by checking out our Idle Kingdom Clicker guide, tips and cheats below.

Set an optimal tile unlock phase in each world

Each world in Idle Kingdom Clicker has the same map, so you won’t always play on a new one. Take this as an advantage to better plan your kingdom’s expansions!

In other worlds, make a plan – know where to expand to first, what to build on each tile and how to optimize building placements in order to maximize profits.

This is very important especially early on in the game (first 25-30 tiles) when you want to have as many resource producing buildings in optimal spots, with as little interference from resource collecting buildings.

Later on, you can optimize further by deleting buildings and creating new ones (either improved structures or new storage facilities), but until then it’s important to have a very clear plan for your kingdom’s early development.

Food is extremely important early on

The most important resource early on – which will be required in abundance throughout the game – is the food. You need it not only to build and upgrade most structures, but also to unlock new tiles, so make sure that you’re always producing as much of it as possible.

As you progress through the game and research more, you will unlock better buildings for producing food, but you will still only have limited amounts of land to build on. And even though food is so important, forests are scarce, so don’t build much there.

Instead, focus on building on the grassland (which you’re getting the most of), trying to create large clusters dedicated to a single resource. This way, it will be easier to optimize resource production and manage everything easier.

Your food production should always be the one that gives you most resources and you should always focus on improving it even further.

Start researching ASAP (and what to research)

Immediately after a reset, your main goal should be that of expanding to the area you have assigned to research and start said research ASAP.

While everything in the game is relatively slow paced, research is the slowest of them all. Fortunately, after starting to play and resetting the world a few times, you will be able to resume research relatively fast.

So make sure to focus your first several minutes after each reset on building the University first. Get it started, then work on other structures needed in the kingdom, then return before you move away from the game to level it up so that you research at maximum capacity.

When researching, my recommendation is to choose the next thing to unlock based on price only: always research next the thing that costs the least.

This way, you will unlock new buildings and bonuses faster, so you will have an easier job at progressing through the game and having a slightly easier job at making your kingdom better.

The more advanced buildings are better choices for resources

At the moment, you can’t research a ton of new buildings to create in your kingdom, but there are many with the “coming soon” stamp on them.

I believe that once you’ll have a ton to choose from, micromanagement of these buildings and deciding which one to build will be extremely important, but right now the numbers available in each resource area are limited.

Still, there’s a golden rule of thumb that applies here: the more advanced buildings are more advantageous than the more basic in terms of resource production.

In other words, a Hunter will produce more food than a Foraging Hut, and so will a Winery or Farm. However, all these advanced buildings are really expensive – and some require basic resources from the lower tier structures – so you can’t just flood the map with Farms to progress faster.

Eventually, though, you will have to micromanage your tiles and the buildings constructed there: once progress becomes slower (or as soon as you afford it – whichever comes first) and you don’t have free tiles to build on, you should start considering destroying the more basic buildings and creating the more advanced ones instead.

As long as you have the resources needed for these advanced buildings to operate, you’ll get more resources out of them, without the need of extra tiles, but this will paradoxically (or not) allow you to buy extra tiles faster.

So probably the most important lesson here when it comes to managing your kingdom is to start demolishing buildings and replace them with better ones when you have the resources for them (usually you can start this after unlocking the 45th tile in a kingdom).

Expand towards the shrines

The various shrines scattered around the map give you various bonuses when you unlock them, so make it your goal to get to as many as possible, as fast as possible.

Prioritize here as well: head over to those that increase food production first, then move towards the shrines boosting transport rates and everything else afterwards.

Always have your Royal Edicts running

The Royal Edicts are real time savers, as they can give you massive boosts to either productivity or resource collection rates.

While early on I used them almost exclusively to boost production (and I still do in the early stages after a reset), I realized that I need to invest more than I thought necessary in resource collecting tiles.

Usually, the one that offers the lowest bonus (but for the longers amount of time) is the best option: it’s better to “waste” royal edicts on resource gathering instead of having to actually buy a new tile and build a stockpile there.

But, no matter what your approach is, make sure to always have those edicts assigned somewhere.

Another extremely option that you have in the game – this time ready to activate via video ads – are the boosts to production and resource collecting.

You will really need both boosts (so you’ll have to watch 2 ads) in order to have everything evened out, but it’s totally worth it: each ad gives you a boost for 4 hours, and you can get a total of 12 hours at once. Make sure you do if you want to progress much faster!

Reset your kingdom at optimal times

Everybody’s wondering when to reset your kingdom in Idle Kingdom Clicker. And the answer varies a bit depending on the stage you’re currently in, but for most of the time, here’s how I prefer to do it:

Whenever the Prestige bonus for resetting is at least 2x, I can safely reset the kingdom and start over.

Early on, I had one moment when I reset my progress at around 6x somehow, but afterwards I saw that getting past 2 and a bit is really difficult and not really worth it: it might take you 24 hours to get from a bonus of 2x to 3x, but if you reset at 2x, after 24 hours you might be able to reset once again and double your speed.

So always look at the time needed until you get the next major bonus in your Prestige rewards: the game shows you that data in the Reset World menu itself. If you have to wait 24 hours for the next tier, it’s too much. Even half of that is probably too much.

Before resetting, make sure that you have bought all the tiles that you can and also that you’re not just minutes away from a new tier from resources, hammers or science. In other words, always reset when long waiting times are needed for the next Prestige boost.

Watching an ad to double your earnings after being away from the game for a while. While this is not as useful if you’ve only been away for several minutes, after the night’s sleep or after any set of a few hours, it’s really worth taking advantage of this offer.

While unlocking new worlds and building new Kingdoms is definitely something you want to do, don’t rush to a newly unlocked one as soon as you have it.

I recommend spending maybe 1-2 resets (or even more) after unlocking one before moving on, because you will start with a bonus that’s easier to get from the old world. But after an additonal 2 resets, you will generally spend the same amount of time in a new world getting the 2x bonus upon reset.

These would be our Idle Kingdom Clicker tips and tricks. If you have additional strategies that work well, we’d love to hear them all in the comments section below.