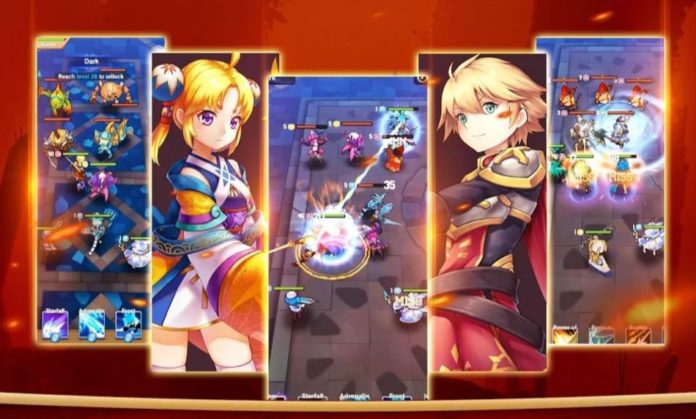 In today’s article we are going to cover all of the Idle Fantasy tips and cheats to help you pass all the in game stages and form a powerful team of heroes to help you idly progress in the game.

In Idle Fantasy you will have to go through waves and waves of monsters and constantly upgrade your team of heroes in order to keep up with the increasingly more difficult stages. I am going to tell you exactly how you can upgrade each hero to make the most out of your team.

So, are you ready for some tips? Then let’s get right into our Idle Fantasy tips and tricks right here below!

Battle manually up to level 10 and unlock Auto

Since there is no auto battle up to level 10, you will have to go and tap on the boss level for each level individually, until you level up. That should be your number one priority, because everything will be so much better once you’re 10.

Once you reach level 10 you will unlock auto battle, and that will play a very important role in your future battles. Unlike in other games, the auto battle will help you fight the stages automatically, without having to manually select the “Fight” option (unless you like doing that, I guess).

Once you select Auto (or rather, turn it on) the game will progress through the fight on its own and you can mind your own business, going about and upgrading heroes and whatnot.

When you upgrade your heroes their maximum level will increase, as well as all of their stats. You can upgrade the heroes by heading to the “Hero” tab and selecting the hero you want to upgrade.

There, you will have to level it up at start (which increases their stats) and then, when you have enough Gold and Soul Essence, you can upgrade them to the next Tier. The more stars a hero has, the more upgrades you can make, which means higher stats overall and higher max level.

I suggest always upgrading the best heroes you have first, and once they are max level (for the current tier), try to upgrade the rest of the heroes in your team too. As far as the upgrades go, try focusing on upgrading mostly your best heroes, because you will need a lot of Soul Essence to upgrade all of them, and it’s better if you don’t waste it on the lesser heroes.

Speed up the battles

Once you reach level 20, you will unlock the speed boost. With that you can speed up the battles to 2x speed, which means that you will go through the battles much quicker. I definitely suggest turning this option on as soon as you unlock it!

Each of the heroes has an element, and depending on which heroes you will deploy on your team, you will gain certain bonuses. These are the bonuses:

These are all the bonuses you get according to each faction. Always try to have some good bonuses, which go well with your team overall. For example, if you have heroes which do a lot of damage, you should try forming a party that goes either for Attack Speed or Crit.

Disassemble the heroes you don’t want

You will need a lot of Battle Spirit if you are going to level up all your heroes, so I suggest that you disenchant the ones that you don’t really use. They only take up space and it’s better to just get rid of them because you will receive other useful rewards.

To disenchant the heroes, simply head on to the Home tab, and there go to the Altar on the right. Tap on the Quick place to quickly select all the lower rated heroes and add them there, or simply select them manually if there is a hero you want to keep instead of disenchanting.

When you disenchant heroes you will receive Soul Dust. Tap on the Soul Shop button and it will take you to the shop where you can spend all the Soul Dust you have collected to buy some specific heroes!

In my opinion all the heroes which are 1-2 stars should be disassembled, and if maybe even some 3 star ones which aren’t all that amazing.

In the Home interface you will find a Wish button to the right of the screen. There, once you have enough Wish Crystal, you can spin the wheel to try to obtain the rewards on it. You can refresh the rewards on the wheel every day for free, by keeping track of the timer, but I suggest keeping the Wish Crystal for when you see something you like.

Also, you can choose to spin once with 1 Wish Crystal, or 10 times with 8 Wish Crystal. Definitely go for the 10 spins because it’s well worth it (since you get 2 free spins basically)! Just have patience to collect all of them.

In Idle Fantasy you will greatly benefit from adding a ton of friends. When you add friends you can send them hearts and they can send you back. These are basically friendship points, which you can use to summon more heroes.

This will give you free summons, so I definitely suggest going to the Friends tab and adding all the people who are pretty high level (because that means they are active). I suggest trying to request friendship from people levels 30 and above, but of course, you can send to everyone!

You can summon more heroes by heading to the Tavern. Here, you will have two main options, with a more possible event limited time summons and faction summons.

The two main summons are the friendship summon, which requires Friendship Hearts (1 summon costs 10 Hearts, and 10 summons cost 100 Hearts) and the Superior Summon. With the Friendship Summon you can only claim 1-4 star heroes, while with the other you can get 2-5 star heroes.

You also have the Faction Summon, which will summon a hero belonging to the specified faction. This will come in handy if you are looking to form a specific team, according to the faction bonuses I mentioned above.

1 summon will cost 225 Diamonds, and 10 summons will cost 1800 Diamonds. Go for the 10 summons if you can hold on to your Diamonds, because it’s a good price!

Put your best units in the back

Now this might not apply to the tankier units, but to the most damage dealing ones. Try to always place your tankier units in the front two slots and have the back 3 slots for the heroes which don’t have that good defenses.

The front line should always be for tanks and (at the beginning) disposable units which you don’t really care if they die or not, because they will protect the back line. Here, in the back line, you should always place your best heroes, especially the high damage dealers.

These would be all of our Idle Fantasy tips and tricks that we have for you right now! Do you know some other useful game tips and strategies? Share them with us down in the comments section below!