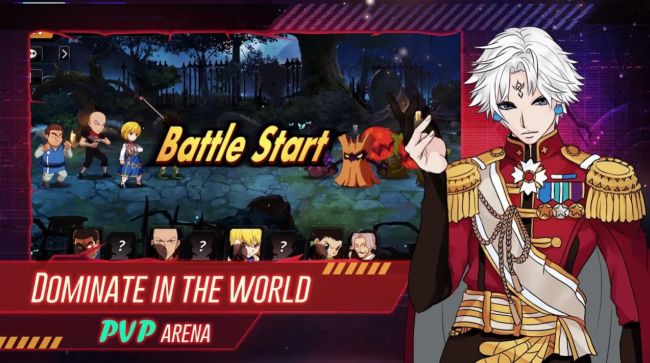 In today’s article we are going to check out all the Hunter Glory tips and cheats that we have gathered for you, and share them with you, so that you can defeat more enemies and get stronger fast.

The game is super cute, and the animations, along with characters and all of their battle interactions, are as much cute as they are amazing! For anime and manga lovers like myself, I find this type of game to be the most appealing and fun, because they combine both fun gameplay with a (usually) good storyline!

But enough with the chit-chat! You came here to learn all the Hunter Glory tips and tricks, so let’s not waste another second and dive right into them right here below!

Progress as much as you can in Adventure Mode

The Adventure Mode lets you unfold the game’s story, and there are plenty of levels for you to play through. I would suggest that as soon as you start the game and get past the tutorial, you go on ahead and progress as much as you can with the heroes that you picked.

It is best if you try to rush the first chapter, because once you finish it you will be able to claim Hanzo, a pretty good character. That, along with some mission rewards that you should have completed in the meantime, will let you do a couple more summons.

Either way, try to not focus too much on the characters for the start of the game, and just go with what you got / what you’re given because that way you will fight your way through pretty swiftly.

The importance of passing new stages

Even if you are not finishing some stages with SSS rank, there are still some significant stuff that you will be able to claim by defeating the monsters and passing more stages. Basically every stage that you pass, no matter the rank you finish it with, will reward you with a first clear reward!

For some stages that might be some hero EXP, while for others it can be Gems! So try to always advance and even if you haven’t cleared a level with maximum score, you can just come back to it at a later time and ace it!

Save up plenty of Gems

If you want to have an even easier time passing the stages, then maybe you should consider saving up all the Gems that you pick up from the missions and stages. When you have collected enough, you should proceed to spend them in the Saloon on buying Ice Beer x10.

It’s good enough if you have already saved up a few of them, because they will reduce the cost of 10x Ice Beers. Basically 10x Ice Beers cost 2000 Gems, but if you have some extras from various missions, the remaining Ice Beers needed for the 10x summons will cost less.

The reason why I consider the 10x Ice Beer summon to be the best “free” summon is because you will get a hero that is guaranteed at least A quality. That is difficult enough to obtain with single summons, so the 10 summons will increase your chances considerably.

The best part about summoning so many times is that you can receive guaranteed a S class hero when you have accumulated 20 summons in total. It will take a little bit of time, but with patience you will get guaranteed one, so if you really want the best outcome, then try to not waste the single summons and instead do two 10x Ice Beer summons.

In my opinion this is the best way to obtain high rated hunters, because the least quality they could have is A, which is super good anyway.

Unlock extra stats in the Album

Every time you receive a new summon that you haven’t acquired before (a new hero) it will be recorded in the Album. The Album can be found when you go to the Tavern -> Album (right side of the screen).

There you will see, depending on category, the various characters that you can obtain, along with the extra stats they each give you in the bottom side of the screen. Try to obtain all heroes currently available if you want to get stronger, because all of those extra stats will automatically be added to your heroes, no matter if you use that particular hero or not.

Also, if you are curious to see the complete number of heroes currently available in the game, you can see it in the top right corner of the screen. At the moment there are 81 heroes in total in the game.

When you start the game, you will most likely start with some pretty average heroes. If you want to quickly progress through and get stronger, then you should probably start upgrading one of them.

The best scenario is if you prioritize your best heroes (A-rank, S-rank), but if you haven’t got any yet, then a couple of B-rank heroes will do just fine – just don’t invest everything into them, because as soon as you get that S-rank guaranteed, you will want to make it powerful.

The heroes can be leveled up by using Yogurt, Melon Dew, Orange Juice and Cool Cola. They each give some EXP to the heroes, all you have to do is tap on the Upgrade button underneath the hero and feed it the EXP. Depending on the hero’s rank, the maximum level a hero can be upgraded to will increase.

Rank up the heroes:

In order to rank up the heroes you will need various Medals, which can be obtained by completing stages and various missions. Each hero needs 4 medals activated in order to be upgraded in rank, and that will change the border of the hero (white – green – and so on).

Star up the heroes:

All heroes can become S rank or whatnot, but that has nothing to do with their star rating. A hero can be starred up by using various other heroes of the same rank and rating. So it might sometimes be better to focus on some B rank heroes and upgrade them as much as you can, since they can reach 6 stars a lot easier than the others.

There are quite a few upgrades that you can do to the heroes, and I really suggest that you think carefully before you go on ahead and dump all your resources into a single hero. It’s best to upgrade a couple of them simultaneously because that way, if that one hero that you invested everything in dies, then there is still someone left to carry the battle!

These would be all of our Hunter Glory tips and tricks that we have for you right now. Do you know some more useful game tips and strategies? Feel free to share them with us and the rest of the players down in the comments section below!