Home Game Guides How to Use Victory Drum in MIR4 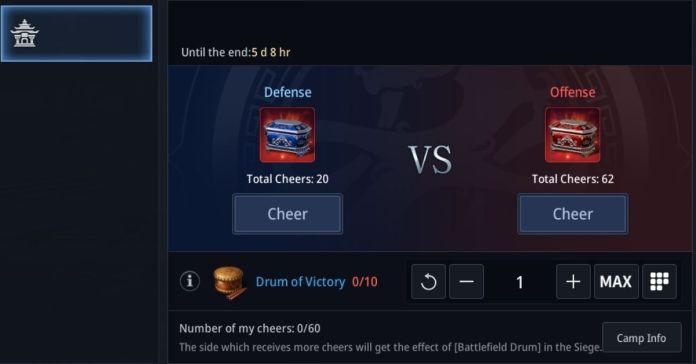 MIR4 is a free-to-play mobile MMORPG that was released at the end of summer 2021. There are lots of different classes you can play and activities you are able to participate in. However, the game is actively developing, and its developers provide players with lots of new content. One of the latest updates brought a new event called Castle Siege Eve, which allows players to participate in a war between two sides. But, in order to be able to help any of these two forces, you have to earn the special event’s currency called Victory Drums. This guide will tell you how to get and use Victory Drums in MIR4.

How to Use Victory Drums in MIR4

Victory Drums in MIR4 is a special currency you need to use to vote for one of two sides. These two forces are actively clashing during the Castle Siege event, and you are able to choose the one you want to support. These two sides are called Defense and Offense, and when you vote for one of them, you get a special loot box. This chest will give you a random special reward.

If you want to vote for any side and obtain a loot box, you need to open the Event menu. Then you should open the Castle Siege Eve tab. There, you will be able to vote for the side you want with your Victory Drums. The amount of Victory Drums you have to pay is 10.

How to Get Victory Drums in MIR4

Victory Drums in MIR4 is a special currency you need to use in the Castle Siege event. This resource is easy to get. You can obtain it just by fighting different enemies, as it drops from most of the monsters in the game. Just remember that you can’t get more than x100 Victory Drums per day.

How to Use Victory Drum in MIR4