Home Guides How to Unlock Great Fairies In Hyrule Warriors: Age Of Calamity 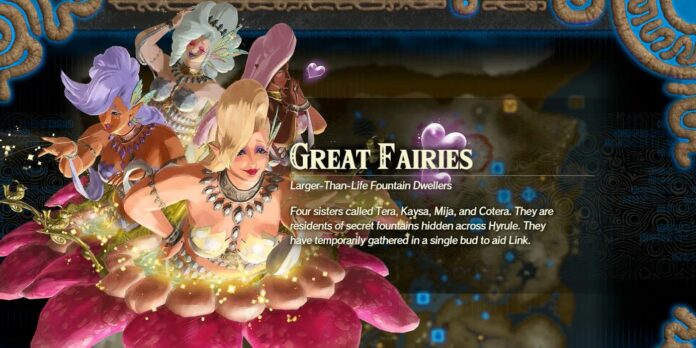 Hyrule Warriors: Age Of Calamity has a great character roster featuring many of the heroes players have met in The Legend of Zelda: Breath of the Wild. Simply completing the main campaign will let you play as many of them, but some others require players to complete sidequests to become playable. Among them are the Great Fairies, characters that Zelda fans should know well, as they helped Link in Breath of the Wild by upgrading his gear.

The Fairy Fountain missions are timed missions that take place in the Deep Snows, Grassy Plains and Desert Sands areas. They are not particularly difficult to complete, but since they are timed, you may want to be at a sufficiently high level to clear enemies quickly. At level 30, you should have no trouble completing them.

The Fairy Fountain: Deep Snows mission is actually the only one of the missions that is not timed. You will have to defeat 5 Ice Moblins before being able to fight the Great Fairy Kaysa

The Fairy Fountain: Grassy Plains mission involves completing several tasks like defeating enemies and collecting rupees. Once they are completed within the time limit, you will be able to challenge the Great Fairy Cotera.

The Fairy Fountain: Desert Sands tasks you with collecting 600 rupees within 13 minutes before being able to challenge the Great Fairy Tera. This shouldn’t be particularly difficult, as enemies drop rupees, so kill enemies as quickly as possible to complete the task and unlock the final Fairy Fountain.

The Fairy Fountain: Battlefield mission is unlocked after completing the previous three missions. To get the chance to fight the Great Fairy Mija, you will have to defeat Mobilins and collect rupees within the time limit. At a high enough level, you should be able to complete this mission within the time limit with ease.