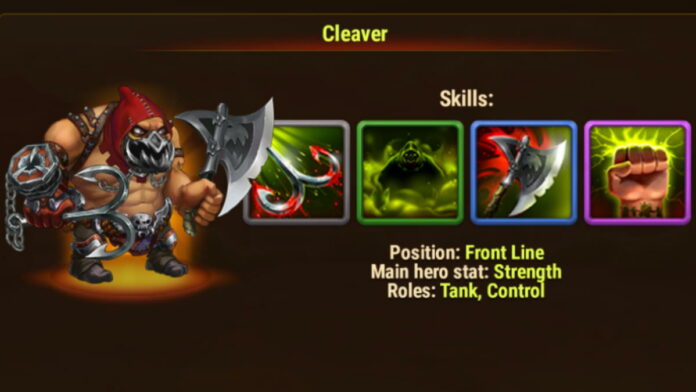 Welcome to Hero Wars, the fantasy strategy RPG where players take on hordes of ferocious enemies from the evil faction known as the Dominion. Players will create their own team of heroes by collecting through the campaign and through traditional “gacha” summoning.

Cleaver is a deadly butcher who specializing in dressing carcasses. If you could not tell from his metal jaw and massive axe, he means business. Still with us? You might just be able to handle Cleaver’s oppressive aura!

Cleaver is a front line hero who excels at pulling foes to meet their vicious end while absorbing tons of damage. His main stat is strength, of course, and his roles are considered to be tank and control.

His starting skill is Rusty Hook. Cleaver will throw out his hook like a fishing rod and pull the targeted enemy right up to Cleaver. This can bring back line enemies into range of your entire team, making this one of his best skills.

His green rank skill is Putrefaction. Once activated Cleaver will begin to emit a noxious gas around him, which deals damage to him and surrounding enemies over five seconds.

His blue rank skill is Mutilation. Cleaver slams his massive axe into the ground, hitting all enemies in a wide area in front, dealing big damage and stunning them.

His violet rank skill is Heavyweight. This passive skill adds more strength onto Cleaver’s already massive strength pool, which greatly increases his maximum health. Every one point of strength is equal to 40 hit points.

Cleaver is a front line menace who excels at controlling his prey and bringing them closer to be executed. His violent skill makes him one of the tankiest heroes in the entire game, making him a much sought after hero.

How do the Heroic Chests work?

As of writing, the only way to get Cleaver is to find him in the heroic chests. Heroic chests are magical chests that contain heroes and soul stones for your existing heroes.

It should be noted that there is a quest to do a 10-chest pull for the first time, and it rewards you with 2,000 emeralds upon completing it. This basically gives you 20 chests to open once you save up 1,500 emeralds.

Nexters (the developers of Hero Wars) has released an info article about the exact rates for heroic chests. There are a couple of things to take note, but we will do our best to summarize them here.

First off, you have an even chance of summoning new heroes you do not own versus heroes you already have. Also, you have a slightly higher chance of finding heroes that you have the most soul stones for.

How to Unlock Cleaver

So, we will get the bad news out of the way first: the base chance to find Cleaver in a heroic chest is a whopping 0.01%. Needless to say you have to be incredibly lucky to find him on your first couple of chests.

The good news is that Cleaver’s drop rate is increased ever so slightly with every single chest you open. Nexters did not say exactly how much it increases by, but it does.

If you are dead set on recruiting Cleaver, you will need to spend a ton of emeralds to open as many chests as you can. Of course, only do this if you are willing to blow all your emeralds, because you will if you pursue this path.

Basically, open as many heroic chests as you can for the best shot at unlocking Cleaver. Keep completing quests to earn more emeralds and hope that you get lucky. If you do not want to spend too many emeralds, at least make sure you claim your free chest every day.

That is all for our guide on how to unlock Cleaver in Hero Wars. We know the odds are stacked against you, but have hope and keep trying and you will have Cleaver on your team eventually!

If you have any other tips about opening heroic chests, please let us know in the comments below. Also, be sure to read the Nexters drop rate info article if you want some exact values and math.

Hero Wars: How to Unlock Cleaver | Tips and Cheats