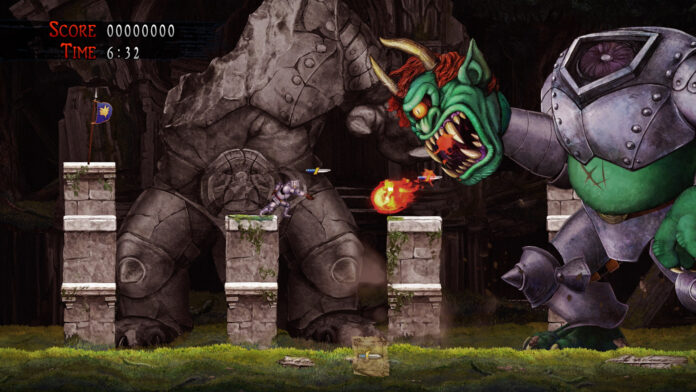 Even with its new coat of paint, Ghosts ‘n Goblins Resurrection feels more like a game from an era long gone, as it is as challenging as the original arcade game was. Arthur can only take more than one hit when clad in his armor, and with enemies coming from all sides, it is very difficult to make it through any stage without getting defeated repeatedly.

Thankfully, Ghosts ‘n Goblins Resurrection does provide some tools that can make your life easier. Weapons in the game come in all shapes and forms, but is it possible to switch between them? Let us find out.

How To Switch Weapons In Ghosts ‘n Goblins Resurrection

Like in the original Ghosts ‘n Goblins, weapons are found on the ground, or inside well-hidden treasure chests. There are seven different weapons, and they all have their uses: the crossbow, for example, grants Arthur better long-range capabilities, while others grant him higher attack power, which is great for boss battles. Unfortunately, every time you pick up a weapon, you will lose the one you currently have equipped, and there is no way to store all the weapons and select them when needed.

While you cannot store all seven weapons, there is a way to switch between two and even three different weapons in Ghosts ‘n Goblins Resurrection. To be able to do so, you will have to unlock the ability in the game’s Umbral Tree. By spending Umbral Bees, you will be able to unlock tons of different abilities and magic, including the ability to switch between two weapons. Once the ability has been unlocked, picking a weapon will replace the unactive weapon, giving you the chance to choose which two weapons you want to bring with you. As you make more progress, you will be able to carry three different weapons, which can make some boss battles slightly easier.