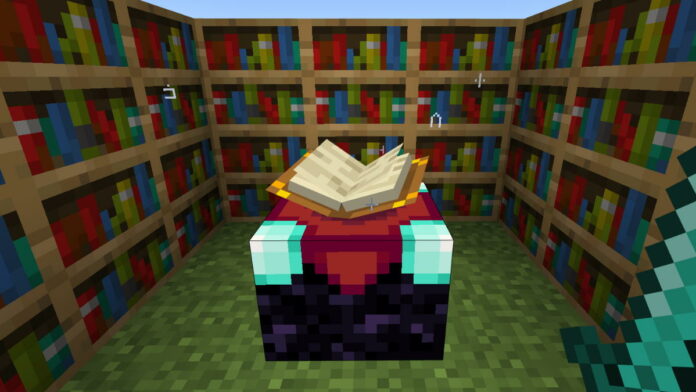 In Minecraft, players can craft an Enchanting Table, a mystical table that calls upon otherworldly powers to grant special effects to equipment. When using the Enchantment Table, unknown characters are displayed for each enchantment, but did you know you can actually decipher them? Today, we’ll show you how to read the Minecraft Enchanting Table language!

Deciphering and translating Minecraft’s Enchanting Table language is easier than it looks. The language is a made up language called the Standard Galactic Alphabet, which first originated in id Software and 3D Realms’ Commander Keen series. Each character corresponds to a letter from the English alphabet!

So, according to Minecraft, the first enchantment will lead to the Smite enchantment, which deals increased damage to undead mobs. Now, let’s take a look at the Standard Galactic Alphabet characters and see what they say. Match up the Galactic symbols with letters, and we get “FRESH FIRE HOT”.

Okay, that’s not exactly the phrase we were expecting. It turns out that the Standard Galactic Alphabet phrases on the Enchanting Table are generated on the spot, with no relevance to its enchantment. Each phrase contains three words that are just randomly selected, which leads to phrases like “FRESH FIRE HOT”.

Unfortunately, for those that enjoy deciphering made up languages, this means you can’t figure out the enchantment based on the phrase. Don’t let that stop you from making up your own phrases, though! Check out the dCode website that offers decoding tools for lots of different made up languages, with the Standard Galactic Alphabet being one of them.

How to Read the Minecraft Enchanting Table Language