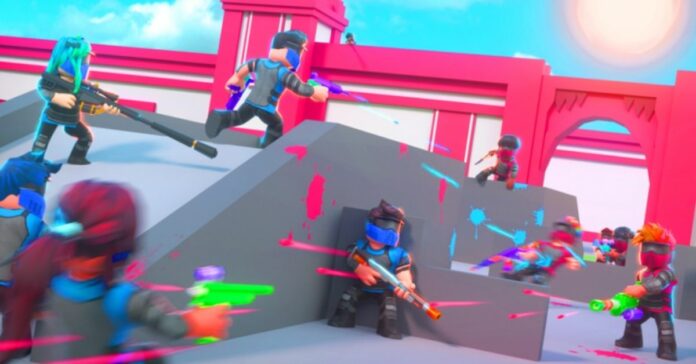 Have you ever heard of paintball? This is an exciting shooting mode in which two teams fight. You can shoot from a special weapon, and ordinary balls become a projectile, which, when hit, turn into a colored spot. This indicates a hit on the target. It is the simulator of this shooting that can be found in Roblox. And in this guide, we will tell you how to play it.

There are two teams. The blue team is fighting against the red team. You can kill your opponents using paintball guns. The task is to capture the point and hold it for a certain period of time. The complexity of the mode lies in the fact that other players meet on your way.

Many players have been playing this mode for quite a long time, so it will not be difficult for them to defeat you in a 1v1 duel. This mode is pleasant not only for the shooting itself and exciting gameplay but also for quite interesting physics. In it, you need to hit your opponent many times in order to defeat him. One hit is not enough.

Your weapon has a clip of 25 rounds. The good thing is that each clip appears out of nowhere. This means that you can reload as much as you like. Plus, you can note the scale of your health. It is displayed as a percentage, indicating that you have 100 health. Each bullet makes a different amount of impact.

RELATED: How to Get and Use Free Faces in Roblox

It’s also nice how the developers worked on the location in the game. It is quite extensive, it has a lot of different objects for which you can hide and do whatever you want. In addition to the main mode, you have the opportunity to upgrade your character. He starts at level 0 and gradually levels up as you play.

Entering the battlefield, you can meet already pro gamers in this mode. This not only complicates the gameplay but also makes it much more fun. Locations are not monotonous and you can explore a new area every time, which does not get bored in a dynamic simulator.