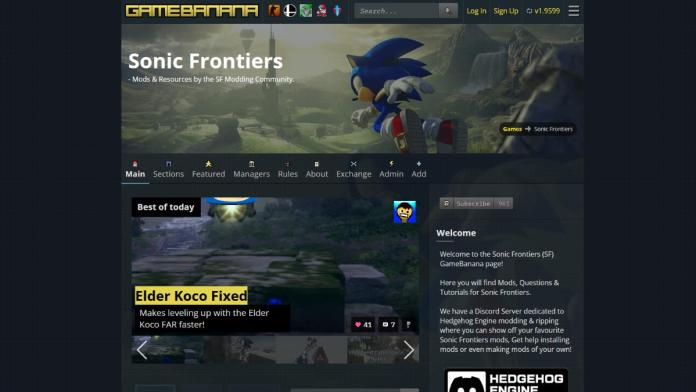 Despite still being very fresh, Sonic Frontiers is already growing a very respectable modding community. There are already a couple of mods for the game that you can try out if you’re playing the PC version, including skin swaps, improved physics, graphical tweaks, and more. Today, we’ll show you everything you need to know in our how to mod Sonic Frontiers guide!

There are a few ways to install mods for Sonic Frontiers, but the method we’ll cover is the most popular way because of how easy it is. This method involves using Hedge Mod Manager, a well-known mod manager for various Sonic games on PC.

Go to the link provided and download the file named HedgeModManager.exe. Thankfully, the Hedge Mod Manager is fully portable and doesn’t need to install anywhere, as it’ll install mods into a separate folder inside the game folder directly.

Run the Hedge Mod Manager executable, and it should automatically ask you to update the built-in mod loader. Make sure you do this, as you need the updated mod loader in order for it to be compatible with Sonic Frontiers. If it doesn’t automatically update, you can manually check for updates in the Settings tab.

Related | Sonic Frontiers: How to Get Infinite Boost

Alright, now that you’ve got Hedge Mod Manager setup, you can take advantage of the 1-click mod installation feature. Head on over to GameBanana page for Sonic Frontiers, and take a look around the mod list.

Once you’ve found a mod you’re interested in, scroll down the mod page until you see the Files section. You should see a button that says HedgeModManager 1-click install, so go ahead and click on that. Your browser should automatically send the link straight to Hedge Mod Manager.

Hedge Mod Manager will then download and install the selected mod, without requiring any manual file swapping from you. Once you have all the mods you want, go back to Hedge Mod Manager and go to the Mods tab. Click on the checkbox next to each mod you want active, then click on Save and Play to launch the modded game.

And voilà—you’re now playing the modded version of Sonic Frontiers! If a mod ends up giving you issues or crashes the game, you can always disable or uninstall it using Hedge Mod Manager. If you have any other questions about how to mod Sonic Frontiers, let us know in the comments below!

How To Mod Sonic Frontiers – Guide