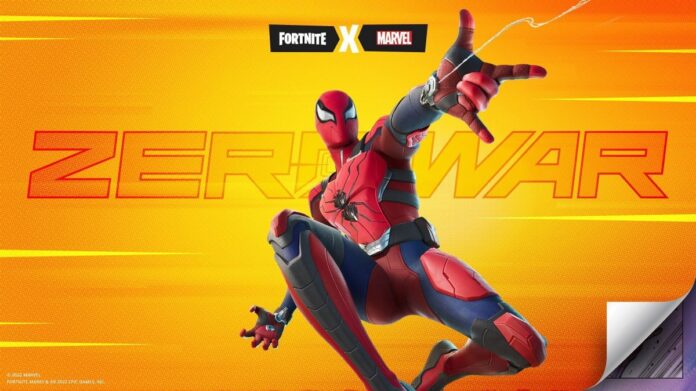 Rumours have been circulating among the Fortnite gaming community that another Spider-Man skin was on its way, and t turns out the rumours are true! Some fans were speculating that, after the Prowler skin was available to unlock in Chapter 3 Season 2 Battle Pass, Mile Morales would be arriving in the Item Shop. This was not the case, however, and it is in fact another Spider-Man outfit making its way to Fortnite. Find out more below!

Getting the Zero Point x Marvel Spider-Man Skin for Fortnite

The Fortnite x Marvel: Zero War Comic is due for release, and readers have the chance to unlock the new Spider-Man skin with each purchase. Fans can purchase the first issue of this new comic book, and with it comes a code to unlock the all-new and exclusive Zero Point x Marvel Spider-Man Fortnite skin.

The comic books are in a 5-part series following Spider-Man other Marvel heroes join Jonesy and The Imagined to save the Zero Point. Each story is written by Donald Mustard, the Chief Creative Officer of Epic Games and the ultimate Loremaster for Fortnite!

The very first issue of these amazing comic books will be released on June 8th, and will include a code to unlock the exclusive Spider-Man skin. There will be no other way to unlock this skin and it will not be available in the Item Shop or in any Battle Pass so it will be a highly rare skin to own!

Each issue of the Fortnite x Marvel: Zero War comics will include an exclusive cosmetic, and if players unlock all 5 items, they receive an extra exclusive outfit! Cosmetics available to unlock with each issue will include Marvel hero themed wraps, loading screens, sprays, and a pickaxe! Visit your nearest comic book store, or purchase it online via any good retail outlet such as Forbidden Planet.