Home Game Guides How to Get the Solar Hax Mod Menu for Solar Smash –... 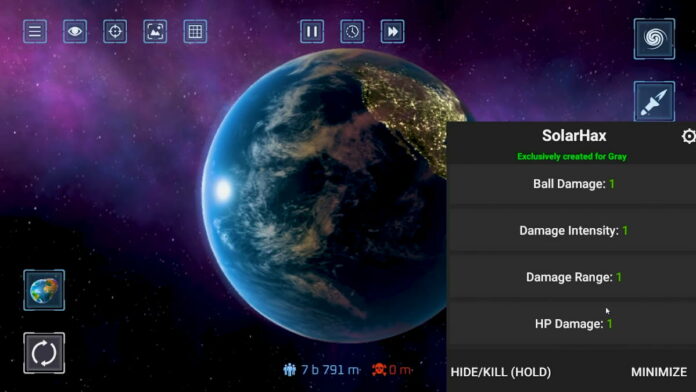 Solar Smash, the planet-busting simulator game, has grown quite popular in the past couple of months. Many big YouTubers are starting to feature the game in their videos, and if you’ve been watching them, there’s a good chance you’ve seen the Solar Hax Mod. Today, we’ll show you how to get the Solar Hax Mod Menu for Solar Smash!

You may have seen a popular YouTuber by the name of GrayStillPlays make a couple of videos about Solar Smash. His videos showed off a bunch of cool and funny ways to destroy planets, but there’s also something peculiar in his videos: he has a mod menu enabled in his game, which allows him to change various things about Solar Smash. It’s called the Solar Hax Mod, and it’s different from your typical modded games that simply unlock everything for you.

The Solar Hax Mod lets you change the values and properties of various objects in the game, like the size of dust, as demonstrated in the video above. You can do all sorts of zany and wacky things with the mod, so of course you might be wondering how to get your hands on it yourself.

Unfortunately, as you can clearly see in the mod’s menu, the mod was designed specifically for GrayStillPlays. The developer of the mod is unknown, and it’s unlikely that they’re going to release the mod to the public anytime soon. For the rest of us Solar Smash fans, we’ll have to stick to the regular tools of destruction, sadly.

That’s the only info we have about the mod right now. Maybe sometime in the future the mod developer will step forward and release it to the public, but for now, GrayStillPlays has exclusive access to it. If we hear from the mod developer, we’ll update this article, so stay tuned.