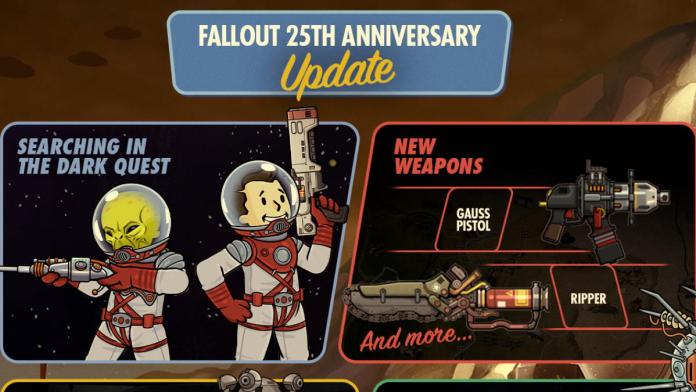 Fallout Shelter got a brand-new content update, just in time for the series’ 25th anniversary! This new update introduces an entirely new quest line, new weapons, outfits, pets, Dwellers, room themes, and more. One of the new weapons includes the energy-based Gauss Pistol, seen throughout the entire Fallout series. Today, we’ll show you how to get the Gauss Pistol in Fallout Shelter!

First off, be sure to update your version of Fallout Shelter to the latest version from your device’s app store. The new anniversary quests will not show up if you’re running the old version of the game.

With the latest version of Fallout Shelter, you should see a new green quest line titled “Searching in the Dark”. The quest line is a total of six parts, and the first one, “Party Favors,” will net you the Ripper upon completion, the first new weapon that’s a part of the update.

To obtain the Gauss Pistol, simply attempt the second part of the quest line, “Mandatory Fun”. During the mission, you’ll automatically be given a Gauss Pistol. It’s also important to know that going forward, there is a chance to find the Gauss Pistol as a random drop from completing quests, exploring the Wasteland, and more.

Related | How to Get the Ripper in Fallout Shelter

Even better, just like any other weapon or armor, any random Gauss Pistols you find may come with a modifier that boosts its stats, like the Rusty Gauss Pistol. On average, Gauss Pistols deal out 12 damage, which is pretty high for a pistol-class weapon, but not too high overall.

That concludes our guide on how to get the Gauss Pistol in Fallout Shelter. If you have any other tips or questions, let us know in the comments below!

How to get the Gauss Pistol in Fallout Shelter