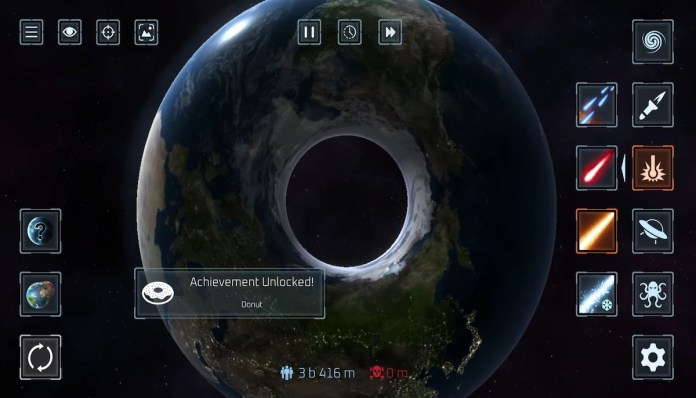 Solar Smash is a planet destruction simulator, it allows the player to use a variety of different weapons to destroy the planet. These include nuclear missiles, lasers, and asteroids.

It’s an exciting game that also lets you destroy and rebuild various planets in the solar system. In this article we will be showing you how to easily get the donut earth in this game. So without further ado, let’s dive into it.

Alright so the first thing you need to do is destroy the actual earth planet. You can do this by completely destroying it with dozens of rockets until you unlock the achievement that says ‘Customized Weapon’.

Afterwards you will also unlock another achievement that says ‘Destroy 1 Planet’. By this time yopu would have desecrated the earth with your bombs. The next step is to patch things up gently so you don’t make a mistake.

Another way of getting the donut planet is by lasering your way through the original rounded earth. What you need to do instead of first destroying the earth rockets and nukes is to use the laser and burn it to the shape of a donut.

How to Get the Donut Earth in Solar Smash