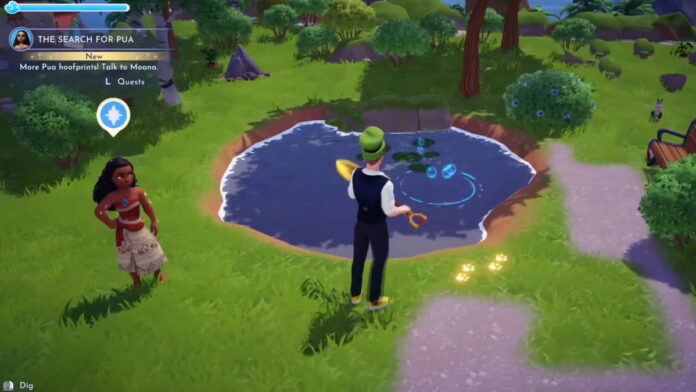 In Disney Dreamlight Valley, players will explore the titular valley to rescue beloved Disney characters from the dark clutches of the Forgetting. One of the areas is themed after Moana, and you’ll have to save not only Moana herself, but also her pet pig Pua! Pua will leave behind paw prints in his wake, so today, we’ll show you how to get rid of paw prints in Dinsey Dreamlight Valley.

How to Remove Pua’s Paw Prints in Disney Dreamlight Valley

Once you unlock the world of Moana, you’ll travel along beautiful beaches as you search for Moana and friends, including the demigod Maui. Moana needs your help, and eventually she’ll give you the quest called The Search for Pua.

You’ll have to look around carefully for Pua’s paw prints, which are highlighted by a golden glow. You’ll find some tracks in the beach, but they’ll eventually lead you back into the Meadow. Once you find more paw prints, talk to Moana to advance the quest.

Once you finish finding all the paw prints in the Meadow, they’ll lead you into the Forest of Valor where you’ll finally find Pua, but he’s entangled by some Night Thorns! Work your magic and get rid of the thorns to finally free Pua.

After you give Pua back to Moana, the quest will finally be complete. However, you may have noticed that some of Pua’s paw prints might still be on the ground. This isn’t a big deal for most people, but for some, the paw prints might be blocking a space you want to build on.

Don’t worry, as you can get rid of the paw prints easily by simply picking them up as if they were a normal item. Just walk over to them and press your pickup button, which is different depending on whatever platform you’re playing on.

That concludes our guide on how to get rid of paw prints in Disney Dreamlight Valley. If you have any other questions or tips, let us know in the comments below!