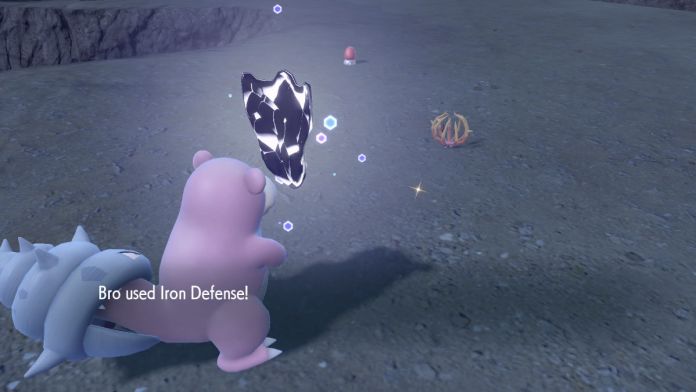 Technical Machines, or TMs, are data discs that can bestow new moves upon your Pokémon in Pokémon Scarlet & Violet. TMs are a convenient way to hone your battle strategies, as you don’t need to grind out levels to learn certain moves. Today, we’ll show you how to get Iron Defense (TM104) in Scarlet & Violet.

TM104 teaches the Steel-type move Iron Defense. The user hardens its body to become as hard as steel, which raises their Def stat by two stages.

You must unlock the crafting recipe for TM104 before you can craft it at the TM Machines, located at every Pokémon Center. There are two ways to do this!

The first method of unlocking TM104 is to storm Team Star’s Fire Crew Base, located directly north of Artazon in East Province (Area One).

Upon defeating Mela, you will automatically unlock a variety of TM crafting recipes, with TM104 being one of them. If you don’t want to deal with Team Star, you can also just find a copy of TM104 out in the wild.

Fly to East Province (Area Three) Pokémon Center, then travel eastward. You’ll run into a quarry, and the yellow Poke Ball containing TM104 is sitting on a hill, near the cliff. Check the screenshot below for the exact location.

Either way you go about obtaining TM104, you’ll unlock the ability to craft as many copies of it as you want at any TM Machine. You’ll need the following materials to make TM104:

The following Pokémon are capable of learning Iron Defense from TM104:

That concludes our guide on how to get Iron Defense (TM104) in Pokémon Scarlet & Violet. If you have any other tips or questions, let us know in the comments below!