Home Guides How to Get Frogs in Minecraft Bedrock 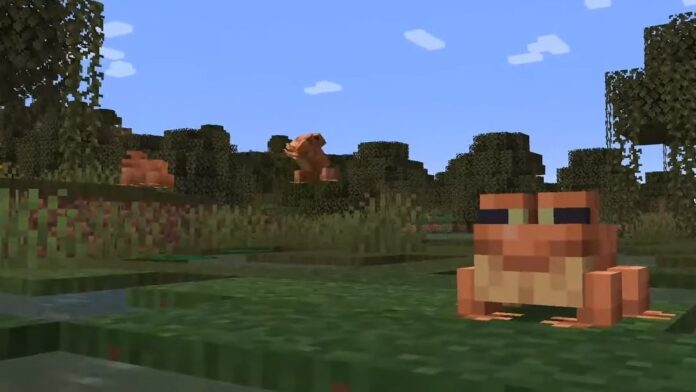 Frogs are coming to Minecraft! These cute little amphibians are being added along with the 1.19 Wild update, as revealed in the Minecraft Live 2021 event. Players can see what these updates will look like via a beta version of the game. Minecraft beta updates can be accessed by toggling the ‘Experimental Features’ button when creating a new world in the beta version. Find out more about this new passive mob below.

Frogs will appear in groups of 1-4, and they feast upon snail slime and fireflies. They can also be grown from Tadpoles, which can be spawned from a frog egg, or by using a spawn egg. Two frogs can be encouraged to mate and produce frog eggs by giving them sea grass. Between 2 and 6 tadpoles will hatch from an egg, which is good because they are pretty vulnerable underwater! Tadpoles can not survive outside of water but are hunted and consumed by axolotl while in the water.

Fireflies will also be arriving with this new update, and will be only 2 pixels in length! They are basically around to be frog food and don’t seem to do much else. Another exciting aspect of frogs arriving in Minecraft Bedrock is the addition of the Froglight. The Froglight is a light-emitting cube that is dropped by a magmacube when it is killed by a frog. They look so bright and come in three shades which depend on the frog that kills the magma cube—purple cubes from tropical frogs, green from snowy frogs, and yellow from swamp frogs.

We look forward to this new update arriving soon in 2022!