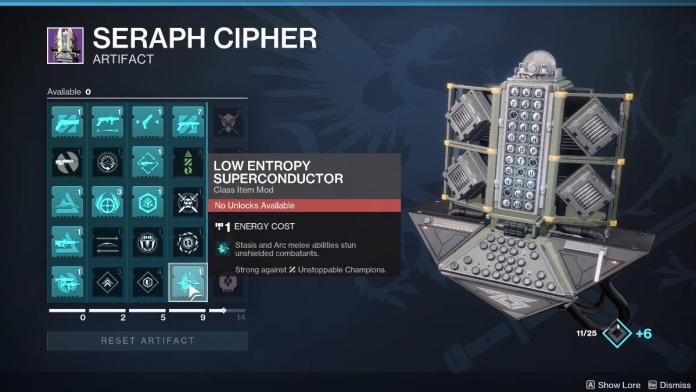 Bungie is a seasoned developer, and as such their games are usually free of major problems. With that said, sometimes things slip through the cracks and get through, such as the current case with Destiny 2’s new Seasonal Artifact mods. Today, we’ll be looking at one in particular: the Low Entropy Superconductor. Here’s how to get and equip Low Entropy Superconductor in Destiny 2.

Avid Guardians were eager to jump into Season of the Seraph, the final season of Destiny 2’s fifth year. This season introduces a brand-new storyline, heist battlegrounds, and a new exotic mission.

With plenty of new enemies to face off against, you know there’s going to be even greater loot. In this season, Guardians can unlock powerful gear through the Seraph Cipher, a new Seasonal Artifact to work through.

Related | How to Equip Class Armor Mods in Destiny 2

In order to gain access to the Seraph Cipher, simply log into the game, and it’ll automatically show you a cutscene, which should lead into the new arena mission. If whatever reason this doesn’t happen, simply head to Europa and go to Hierarchy to start the mission.

Complete the mission, and you’ll be automatically sent back to the H.E.L.M., where you can speak to the Exo Frame to receive the Seraph Cipher. Like the previous Seasonal Artifacts, you’ll need to gain experience to level it up and unlock new rewards from it.

In particular, there are a lot of cool new Class Item Mods to play around with, and one of them is the Low Entropy Superconductor. If you were one of the many players to unlock this mod, you probably noticed that you can’t equip it.

For whatever reason, players were not able to equip the Low Entropy Superconductor Class Item Mod where it’s supposed to go—it could only be equipped on Artifice armor. Turns out, most of the other Class Item Mods were experiencing the same issue.

A few days after the season started, Bungie stepped in and confirmed that this was indeed a bug. Thankfully, with yesterday’s hotfix patch, all Class Item Mods unlocked from the Seraph Cipher can now be equipped normally.

That concludes our guide on how to get and equip the Low Entropy Superconductor in Destiny 2. If you have any other questions, let us know in the comments below!

How to Get and Equip Low Entropy Superconductor Destiny 2