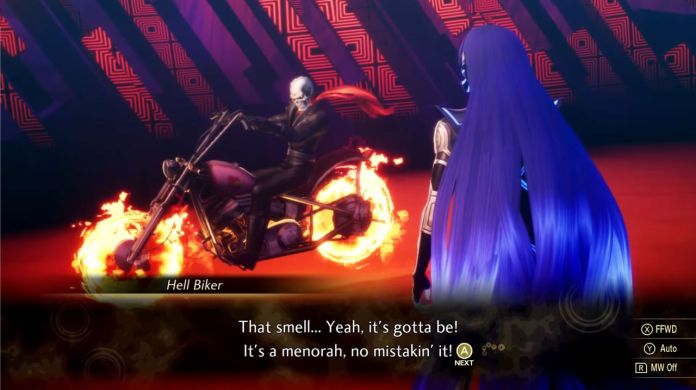 Shin Megami Tensei V is filled to the brim with powerful demons to fuse, but it seems like those available in the base game weren’t enough for developer Atlus, as one of the DLC packs includes a few more powerful ones that fans of the series will instantly recognize.

Among the exclusive demons you can fuse by purchasing the Return of the True Demon DLC is Hell Biker. Here’s how to unlock this Special Fusion and how to perform it.

How to Fuse Hell Biker in Shin Megami Tensei V

Before you can fuse Hell Biker via Special Fusion in Shin Megami Tensei V, you will first have to defeat him in combat. To fight him, start the Return of the True Demon quest, defeat Daisoujou and then head to the highway to the southeast of the Mitatebashi Leyline Fount. Hell Biker is a Level 36 demon, so you will need to be at around this level to stand a chance.

Once Hell Biker has been defeated, you can get him by fusing Kelpie, Andras and Yurlungur.

Considering Hell Biker is essentially a demon you paid real money to get, you should not be surprised to learn that he is a rather good low-level demon. He nulls Fire and Force, resists Light and Dark and is only weak to Ice. Hell Biker is also very good at handling a multitude of skill types, coming with a +3 in Physical, +4 in Fire, +4 in Force and +2 in Ailments. His -5 in Ice makes him quite bad at using this type of skill.

Below, you will find all the Hell Biker’s skills

How to Fuse Hell Biker in Shin Megami Tensei V