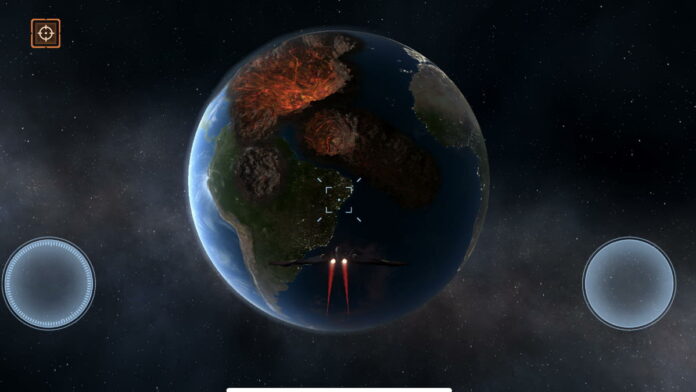 Solar Smash is a galactic destruction simulator. Choose your weapon of planetary annihilation, ranging from direct projectiles like missiles and laser, to more creative weapons like cosmic giants and climate bombs! If you’re familiar with the game, you know that the developer loves to hide little secrets in the game. We’re here to show you how to fly the plane in our Solar Smash secret unlock guide!

How to Fly the Plane in Solar Smash

Solar Smash’s newest secret is a fun one for those that like to fly planes! You know that one weapon that summons a fleet of planes that fire a laser barrage upon the planet? Well, did you know you could actually pilot one of the planes?

To jump into the pilot’s seat, you’ll need to do things in a specific order. First, tap on the UFO button on the right side to get to the ship weapons. Next, tap on the button with the three planes with red streaks—it should be the bottom most button.

Related | How to Get the 1337m Achievement in Solar Smash

You should see two virtual buttons appear on your screen. The left button is actually a joystick that rotates the camera around, while the right button is normally used for launching a barrage in the direction you’re looking at. However, with the plane weapon selected, the right button will instead put you in the pilot’s seat of a plane!

Shortly after you press the right button, a plane will fly into view. You can use the left joystick to control the plane, and pressing the right button will fire missiles in front of you. One of our favorite things to do is blow a tunnel through the planet and then fly through it!

You can fly for as long as you want, so we hope you enjoy flying the secret plane in Solar Smash. That concludes this guide, and if you have any other questions about the plane, let us know in the comments below!

How to Fly the Plane in Solar Smash: Secret Unlock Guide