Home Guides How to Defeat Volvidon in Monster Hunter Rise 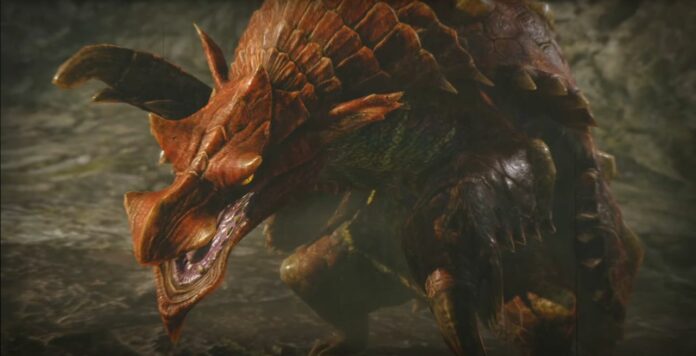 Here’s everything you need to know to take down this monster with ease.

Volvidon is a Fanged Beast that made its debut in Monster Hunter 3 Ultimate and has been missing in the series since the days of Monster Hunter Generations. Despite its long absence, it hasn’t become any less annoying to fight due to its ability to inflict various status ailments. Bring weapons capable of dealing

Volvidon can be found in the Sandy Plains, starting in Area 8 and in the Lava Caverns starting in Areas 12 and 13. The monster moves around, so check out the areas surrounding the starting ones if you cannot find it.

Be Sharp or Be Dead

Volvidon’t skin is extremely tough, so it’s hard to penetrate with most weapons. To ensure you can deal enough damage to the monster, you need to bring a weapon with at least Green Sharpness to prevent the monster’s from repelling attacks.

Chop That Head Off

Even with Green Sharpness, dealing damage to Volvidon isn’t easy. The head and abdomen are among the softest parts of the monster, so focus on them to deal as much damage as possible and make the fight shorter.

Always on the Move

Volvidon has a few attacks that go off very quickly, including a few that inflict Stench and Paralysis, two status ailments that, in this fight, pretty much spell death. As such, you should always be on the move during this fight, and have a Deodorant or two with you to heal Stench as soon as possible: this status ailment prevents you from using most items, so you definitely want it healed quickly.

Volvidon’s signature attack is the Armored Shell Attack, which sees the monster curl up in a ball and come after you. While this attack is quite fast, there is enough time to dodge it properly by anticipating its direction. Don’t panic and dodge randomly, and you will be fine. Volvidon will also be left defenseless for a short while after the attack, so proper dodging will allow you to go on the offensive as well.