Home Guides How to Defeat Rakna-Kadaki in Monster Hunter Rise 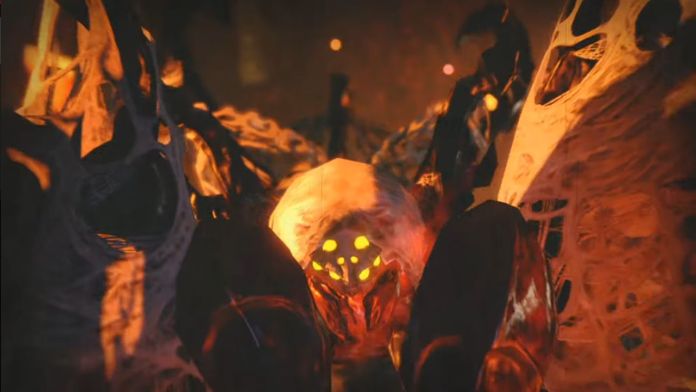 The Monster Hunter Rise monster lineup is among the most diverse we have seen so far in the series. While seeing old faces come back in the latest game made more than a few long-time fans happy, it’s going after new monsters that makes Monster Hunter the amazing series it is, and in this regard, Monster Hunter Rise definitely does not disappoint.

Here’s how to defeat Rakna-Kadaki, one of the new monsters that made its debut in Monster Hunter Rise.

Rakna-Kadaki is a brand new monster that made its first appearance in the series right in Monster Hunter Rise. This Temnocrean is a deadly monster that can inflict Fire damage but is weak to Ice and Water, so make sure to bring the right gear to the fight. You will definitely need it, especially if you haven’t fought the monster already and you are not familiar with its many deadly attacks.

Rakna-Kadaki comes with a lot of extremely annoying attacks, but there’s no doubt that the Flamethrower special attack is the most annoying, as it deals a lot of damage and can be difficult to avoid completely. Thankfully, it’s possible to make this attack less of an annoyance in a few different ways. By attacking Rakna-Kadaki repeatedly, you will be able to remove the webbing that surrounds it, exposing its weak points and disabling some of the Flamethrower patterns. If you’re not anywhere close to remove the webbing, you can use Flash Bombs to interrupt the Flamethrower attack altogether.

If the Flamethrower takes the cake in terms of annoying attacks, other techniques like Head Lunge, Web Spray, and Web Traps can be just as annoying, as they inflict the Webbed status ailment that leaves you completely open for a few seconds, which are more than enough for Rakna-Kadaki to inflict tons of damage to you. For this reason, make sure you stock up Cleansers to restore your status as soon as possible.

Time to Get Exposed

Rakna-Kadaki is helped throughout the fight by the Rachnoids on its abdomen, which grants the monster access to some very powerful special attacks with huge range that can be difficult to avoid. Thankfully, these attacks can be disabled by taking out the Rachnoids, so focus on attacking the monster’s abdomen when you get the chance.