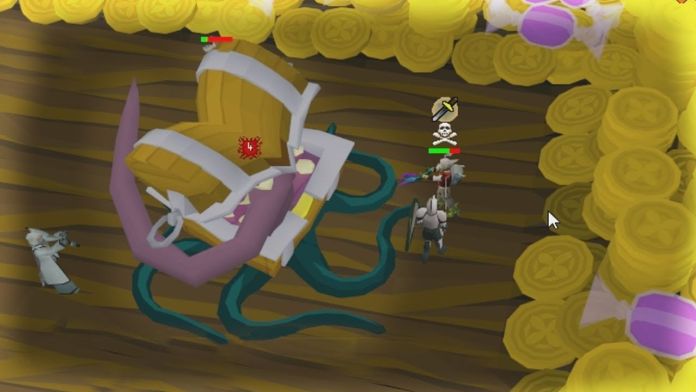 Probably the most important part of OSRS is defeating bosses. Every boss has specific abilities that are much more powerful than yours. So, it is impossible to defeat the boss in OSRS if you do not follow a specific strategy. Read this guide, and you will find out how to beat the Mimic in OSRS.

Who is The Mimic in OSRS?

Before finding out how to defeat the boss, it would be best to discover more about the monster. The Mimic is one of the most powerful bosses in the game. It has an average melee attack and extremely overpowered candy and stomp attacks that can deal serious damage despite the distance.

Related: How to Beat Demonic Gorillas in OSRS – Guide

Defeating the Mimic is a real challenge, even if your combat points score is 70. Moreover, you should use a specific strategy to survive longer than a minute fighting with this boss. And below, you can find the best approach to kill the Mimic in OSRS.

Best Strategy to Defeat The Mimic in OSRS

You should know that the only way to defeat Mimic is to use the advantage over the low-mage defense of this boss. First, you should use the significant Melee protection that guarantees great survivability against the Mimic. Also, consider that Third Age minions should be ignored while fighting against the boss.

Talking about weapons, take dragon claws and a dragon dagger with melee fight boosts. Use a few special attacks and switch your build to a magic setup. It allows you to distance yourself from the boss dealing significant damage to it. Moreover, you can use freeze magic to slow down or entirely freeze the Mimic.

That’s it with beating the Mimic in OSRS. Even though defeating this boss might sound pretty easy, you might need a few tries fighting against this boss. Also, remember that the minimum combat points score for defeating The Mimic is 70. And while you are still here, make sure to check our guide on how to get Gout Tuber in OSRS.

How to Beat The Mimic – OSRS Boss Fight Guide