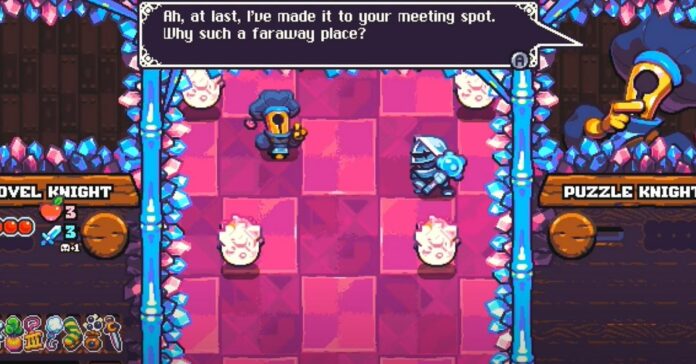 Shovel Knight became a very big hit after it was released. The game is an old-school pixel platformer that is able to return a player back to the age of 8-bit and 16-bit consoles made by companies like Nintendo and Sega. There you are able to play as a knight that has a shovel as his main weapon. He is able to perform different moves and attack his enemies. Now the developers released another game that belongs to the Shovel Knight franchise. It is a puzzle game where you will need to fight different bosses. This guide will tell you how to defeat Puzzle Knight in Shovel Knight: Pocket Dungeon.

How to Defeat Puzzle Knight in Shovel Knight: Pocket Dungeon

Puzzle Knight is a problematic opponent to defeat. He constantly throws a lot of attacks at your character and these are hard to avoid. At the beginning of the fight, he will use his weapon to attack with a small AOE. However, when you will deal some damage to the boss he will start to spam a huge amount of attacks in a large AOE. It makes him problematic to fight due to the fact that it is hard to approach him without receiving damage. The best advice we can give to you is to collect healing potions to keep your character alive and attack the boss when he stops throwing his AOE spells.

How to Beat Puzzle Knight in Shovel Knight: Pocket Dungeon