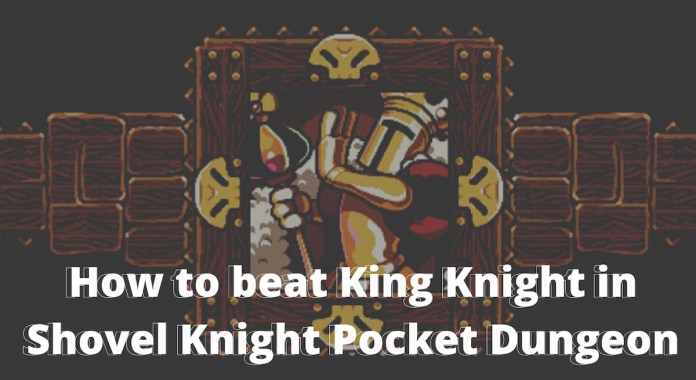 Shovel Knight Pocket Dungeon does brilliantly in taking all the elements of the acclaimed original platformer and turning it into an addictive roguelite-puzzlerwell that brings back several classic characters.

These characters or rival Knights return as bosses that you can fight and try to defeat in order enable you use them yourself as they are all playable characters that come with their respective sets of unique advantages.

King Knight is the first of the classic rival knight that you’ll face in the game whenever he appears at the Pridemoor Keep. So in this article we’ve put together a brief guide that’ll help you defeat the King Knight.

How to Beat King Knight

Once the fight is underway, all sides of the grid will become clogged with bricks. You will need to destroy them quickly using your chain attacks in order to have enough room to maneuver, even though King Knight’s charge attack will destroy a couple of them.

His charge attack is also the most dangerous of his attacks to look out for and you can easily avoid them as columns of three blocks will be highlighted which indicates the direction of his charge attack. You can simply sidestep to avoid being trampled.

Also, you should try not to get mobbed as well because the grid will periodically fill up with Boneclangs and Beetos. So oigjt to snuff out and get rid of all the baddies early.

They’ll be rocks and potions trickling in from time to time and whenever King Knight is hit, he becomes aggressive and tries to hit you with a counterattack next.

Follow the above steps and you should defeat the King Knight in a couple minutes. Afterwards he’ll be unlocked as a playable character and you can use his special moves such as the signature charge to your advantage against other enemies.

However, despite dealing extra damage to enemies, the signature charge also affects you slightly upon contact. So before you start charging and bashing enemies, know that you’ll be taking extra hits yourself.

How to Beat King Knight in Shovel Knight Pocket Dungeon: Tips and Cheats