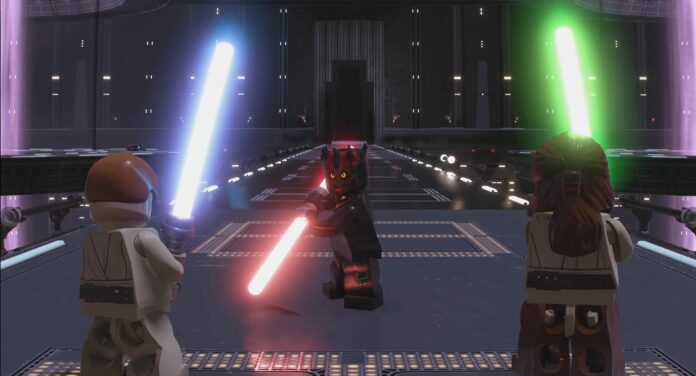 Lego Star Wars: The Skywalker Saga lets players experience the events of the original, prequel, and sequel Star Wars trilogies and, as such, you can expect to take part in a lot of very epic battles. They are so epic that the fact that they are rendered in Lego fashion doesn’t make them any less so.

Among these battles will be the iconic battles against Darth Maul. Here’s how to defeat the Sith without too much trouble.

How to Beat Darth Maul in Lego Star Wars: The Skywalker Saga

The battle against Darth Maul in Lego Star Wars: The Skywalker Saga is divided into three phases. While the fighting part is relatively straightforward, it’s being able to get to him every time he runs away that is a little complicated.

As soon as the fight starts, you will have to take on Darth Maul head-on. Keep your distance when he is moving around and throwing his weapon, and wait for an opening to attack him without risking getting damaged. Once he is defeated for the first time, he will start running away, and you will have to take down a few droids on the way. Take them down and resume the fight against the Sith, making sure to not attack him when he is rotating his lightsaber.

Once you defeat Darth Maul a second time, the second phase of the fight will begin. He will run away again and destroy the bridge, forcing you to time your jumps on the bridge’s pillars to reach him. Time your jumps right, otherwise you will be damaged. Once this sequence has been completed, take down the droids in the area. At this point, Darth Maul will retreat again, and you can follow him by either moving the nearby crates with the Force to make a path or using the elevator and then jumping down. Resume the fight, and once he is defeated, he will retreat once again, starting the third and final phase of the fight.

During this final phase of the battle against Darth Maul, you will have to complete a couple of puzzles. The first one is located near the third barrier, which requires you to connect the batteries using the Force. The second puzzle also involves barrier and batteries, only that you will have to match the batteries by color: move the blue one into the blue socket, and then do the same for the green one. After this barrier has been deactivated, you can finally go after Darth Maul again, and once you defeat him again, the battle will finally be over.

How to Beat Darth Maul in Lego Star Wars: The Skywalker Saga