Home Guides How Does Combat Work In Bravely Default II 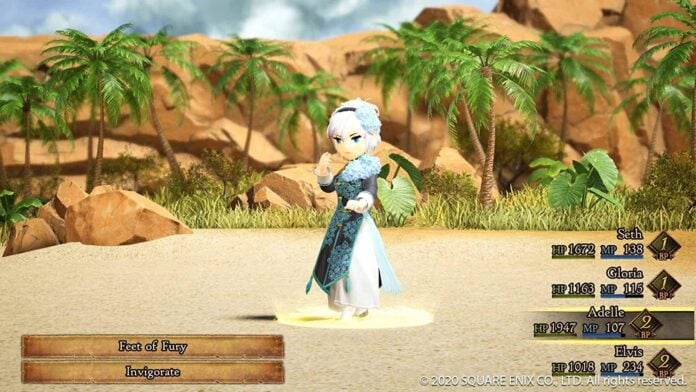 Bravely Default II plays like the best classic JRPGs released over 20 years ago, but this doesn’t mean that the third entry in the series doesn’t bring anything new to the table in terms of mechanics. The combat system is definitely one of the game’s highlights, as it mixes classic mechanics with a risk-reward system that can make regular enemy encounters faster, and boss battles tense and exciting.

If you have never played a Bravely Default game before, however, there will be some combat mechanics that will leave you a little confused. So, here’s everything you need to know about the Bravely Default II combat system to have fun straight from the very first battle.

Bravely Default II emplys a basic turn based combat system, but with a few interesting twists. Unlike the first two entries in the series, the new combat system takes a page from more recent entries in the Final Fantasy series, featuring a charging bar located right below each character stat. Once the bar is full, the character will be able to act. This ATB-like system works great in conjunction with the other mechanics, making combat a little less obscure than other classic JRPG where you do not know when exactly each character will act.

On your turn, you will be able to unleash regular attacks, use items, use abilities and Brave. Make sure to analyze your enemy with the right ability or item to learn of their weakness, as attacking them with the correct technique or magic spell will deal increased damage.

The Brave system is what defines the Bravely Default II combat system. During your turn, you can press the R button to Brave, gaining an extra action for the turn. You can Brave up to three times, effectively becoming able to unleash four different actions with just one turn.

This, however, comes with some caveats. If you do not have any Brave Points in stock, your points will actually decrease to negative values, meaning that you will need to wait for one or more turns to be able to act again. As Brave Points are restored by 1 each turn you do not act, you can choose to guard to earn Brave Points that can be spent without any major consequences. Balancing when to Brave and when to guard is the key to victory.

Bravely Default II doesn’t feature any random encounter, as enemies are all visible on the field. If you press the Y button, you can swing your sword at them, and start battle with 1 Brave Point for each character. If you just bump into the enemy, you will start the battle with 0 Brave Points, while getting attacked from behind will make the enemy start battle with 1 Brave Point, which is something you should avoid at all costs. Also, you cannot run from battle by holding the ZR and ZL buttons if the enemy has the initiative, so beware.

Bravely Default II doesn’t let you change Jobs during combat, but the combat system does provide some flexibility with the item menu. If you pick the Item option during combat, you can scroll to the top of the menu to find your equipment, which can be changed freely. This is another clear throwback to older entries in the Final Fantasy series where you could change equipped weapons on the fly.