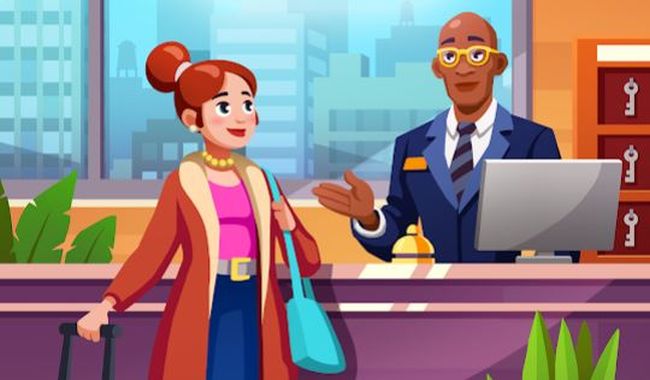 In today’s article we are going to share with you all of our Hotel Empire Tycoon tips and cheats to help you build the best hotels and to make a lot of money in the process.

Since this is an idle game, you will most likely either have to watch quite a lot of ads which will help speed things up a notch, or to go AFK at some point when you are running low on funds. But since we are going to tell you everything that you need to know, all that you should do is sit back and relax while the hotel is growing right under your eyes.

So without further ado, let’s not waste another second and dive right into the Hotel Empire Tycoon tips and tricks right here below!

At the very beginning of the game you should be following the quests, because they will give you some extra money whenever you complete one of the tasks. You can find the quests in the upper right corner of the screen, and they will ask from the beginning easy requests, such as build a second dining table in the restaurant, or build a double room or so.

Try to do what they ask because once you complete one of the tasks, a new one will show up in its place and give you new requests which will give you better rewards.

If you want to skip the quests altogether, you will need to manage your money early in the game quite well, because during the early stages of the game it’s really difficult to get into making thousands and thousands of dollars because hotels have expenses, and in the game as well.

Even though I am not one to go for quests all the time, in this game I prefer to do so because they give some quite good and useful rewards and early on you will need every little penny if you want to keep your staff working.

Hire personnel, but at the right time

The hotel will need maintenance staff, as well as chefs and other staff members. You should go ahead and hire 1 of each, because at the beginning you will most likely not be able to afford more.

But as the hotel improves and you are building more and more rooms, you should make sure that you also hire more personnel because they will help keep the customers happy.

So I suggest that early on you shouldn’t focus on hiring 2 maintenance staff members, because they will end up resigning if you can’t afford to pay their salaries. And yes, resigning staff is a thing!

When to hire more people

So hire more people when you are 100% sure you can afford to pay all of their salaries, otherwise just wait a bit.

You should always have the double income activated, because that will let you make more money from all sources. You can find this option when you tap on to the VIP Campaign button in the bottom side of the screen. That will play an advertisement and in exchange will fill up the bar for the 2x income for you.

I suggest that you try to watch several ads, until you’ve filled up the bar there, because that will give you a total of 2x profit for two hours. So try to do this because it will make quite a big difference when you want to make a lot of money and make upgrades.

Buy an item for each room

Each of the rooms that you build can be equipped with TVs, and other useful facilities. I suggest that you go ahead and buy one of each for each room that you have, because they will increase the amount of money your customers will give you when checking in there.

Another thing which you should do once you have enough money is start upgrading these items in the rooms. That will increase the comfort and stars of the hotel, so try to do it when you have gathered enough money.

One of the most important things early on in the game is to focus on unlocking the double room, and buying a second one. In order to do that you will first need to buy a battery for the generator in order to produce more energy and power to the hotel. That costs 2500 dollars – so save for that.

Once you built the battery, you should focus on saving another 3000 dollars to buy the second double room, because that’s when you will start making money. The more rooms you have the more customers you will be able to have and that’s how you can start making more money.

So I suggest that you try your best to unlock more rooms and upgrade them, because that will make people pay more for their stay.

Skip through the night by watching an ad

During the night your hotel will not be able to get any new customers, and the entire staff will be off duty.

So try to skip this part by watching an advertisement. When you do that you will be able to get right back on track with your staff in their place and ready to greet new customers.

Don’t bring the cab at night!

If you played the game for a little bit, you will notice that sometimes you will have an option appearing in the right side of the screen with a cab icon. When you tap on it, the cab will be able to bring you a few customers in.

However, you should never do this during the night because the front desk is empty and there is nobody to check them in, even if you have empty rooms!

There will sometimes be a Very Important Patron in your hotel lobby who has some sort of glowing aura. Whenever you tap on him, he will give you some money so try to accept his offers especially early on because they will be super useful and help you make a lot of upgrades in the game.

If you want to quickly buy a new battery and then build a second double room, then all you should focus on early on in the game is getting the VIP’s offers. Those will give you plenty of dollars to get by and if you happen to be low on money and can’t possibly pay salaries and such, then make sure that you take his offers.

There are a ton of things which can be upgraded in the game, and if you want to make profits, then you should definitely start making the best upgrades first. I will tell you below how much you should prioritize them, so try to follow my tips because they will help ensure the success of your hotel!

– Parking: whenever you upgrade the parking, you will build another parking slot. This will allow for more customers to come in, so make sure that if you built a new room, you also buy a new parking slot. The Barrier gate for the parking slot is also super useful, so try to buy this once.

– Restaurant: in the restaurant you should make sure that you buy every single item there once because they will let you have more customers in during lunch time, and that’s a good way to make money. Then, you should focus on the food quality and also upgrade the tables one at a time.

– Housekeeping room: make sure that you buy every item here once, and then start upgrading them – however, don’t make this your number one focus because this feature will do fine even as only level 1 for start.

– Electrical room: this is a very important room, as it will power up the entire hotel. Make sure that you buy all the batteries there, even thought they will cost quite a lot. I suggest that you save money and make plenty of upgrades here, until you have reached around 70-80 max energy at least, and then try to build a bar as well.

– Upgrade the rooms: in the rooms you will also have a couple of premium items. If you want to make some extra money, you can choose to put them in a double room, as those rooms are way more profitable than the single rooms.

Advertising is super important when it comes to bringing in new customers, but they come at a cost – literally, they cost money. So try to not use them just yet if you are still at the beginning, as they will take some cash hourly from you (in game hourly) so they might not be worth it until you have more rooms and you can accommodate more people.