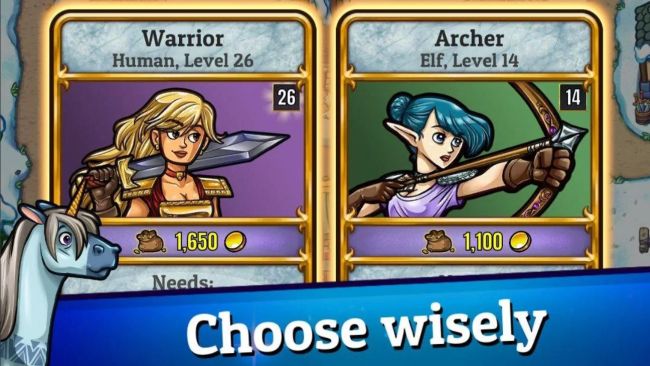 In today’s article we are going to cover all of the Hero Park tips and cheats to help you become stronger and pass more levels with ease!

If you are looking for a game where talking unicorns rule and you shape your own dungeons in difficulty and monsters, then you’ve found it! Hero Park is not only a fun game, but also one which brings a pretty unique system for its players: you breed your own monsters that you fight and recruit heroes for that in the process.

But putting all of the praising aside, you came here to learn all the Hero Park tips and tricks that we have for you, so let’s not waste another second and dive right into the Hero Park guide right here below!

Learn and understand the basics of the game

The most basic stuff about the game that you really need to learn are fairly easy: try to get the village to be as active as it used to be, by managing everything, from dungeons to buildings, and bringing in more warriors!

Now by managing I really mean that: you are in charge of creating “monsters” for your dungeons, for finding and bringing in fighters to fight for you, and provide everything they might need in their journey.

So if you are still lost when it comes to this, then I will explain everything in much more vivid detail!

Send the Unicorn on expeditions to bring more heroes

In the upper right corner of the screen you will have the unicorn icon with an “Attack” button underneath. That is going to be X/10 for start, because that is your “energy”. Basically whenever the “Attack” button is available or when you see on the top left side of the screen that you have less heroes in the town than the max number, for example 1/9, you can send the Unicorn to bring you some more!

When you’ve reached the maximum number of heroes your town can have for the moment, then you can’t send the Unicorn on expeditions anymore, and you will have to wait until some of them leave the village.

My suggestion would be to try and always send out the Unicorn when you are at 8/9 for example or so heroes, because it will bring on 3 more (you choose them) and that’s how you can have more than the town limit basically.

Which heroes to pick?

If you aren’t exactly sure which heroes to pick and you are still having doubts about them, then let me briefly explain how this works:

At start you can pick 2 heroes out of the 4 you get: try to pick the ones which bring the most profit (highest amount of coins). Once you picked the first 2, the rest will disappear and 2 more options will become available. Select one, and then wait for them to come visit your village!

My suggestion when picking the heroes is to always try to look for the ones which have the “shiny” coin. I think that these can spend the most, so pay attention to their coin icon and if they have it shiny (like some kind of glow around it) then bring those heroes.

If none of them do, then try to select the heroes with the highest coins on them, or the ones which have the most items necessary from what you have.

When you see an exclamation mark over a building, it means you can do something there!

Those small yellow exclamation marks can show you what are the buildings where you can actually produce more, or have run out of tasks pretty much. Tap on one of them and you will see that there are quite a few things you can do there – for instance, at the Junk Factory you can start making more junk!

Save Gold and build new buildings

When you start the game you will build a couple of buildings because of the game tutorial – but they shouldn’t be all! You should save up Gold to build some more, because the more you have, the more items the heroes can buy (therefore spend more money!) and you’ll make your money back in no time.

Some of the buildings that you should definitely focus on saving gold for in the early game are these:

– Graveyard: here you can breed some more powerful enemies which the heroes actually love to fight, such as Skeletons and Zombies. The Graveyard can be built in the top side of the village.

– Magic Shop: in here you can start crafting magic wands and whatnot for the mage heroes, which will definitely spend a fortune on them. You can build the Magic Shop in one of the village’s bottom slots.

– Weapon Forge: just like the Magic Shop has items for the mages, in the Weapon Forge you can make weapons for the warriors and dwarves. It can be built in the bottom slots available in the village.

These would be the buildings that you should start working on as soon as you gather 2000 Gold (for each one of them). I suggest that you start with the Graveyard, then the Weapon Forge and then the Magic Shop.

Assign personnel to your buildings

At start you can only have 1 staff person working for producing stuff in your buildings. I suggest that you always have the best one, because they can usually produce much better items and that will result in more Coins for you.

Each building can have 1 staff member assigned for free, but if you choose to spend 2500 Gold you can unlock a second slot where you can assign a second staff member. So for example in the Tavern, you can have Magdalena for start who sells Meat and Beer, and then once you unlock the second, you can add Mom too, who produces Meat, Beer and Snacks!

I would suggest that if you are not having a crazy demand for items, then don’t spend Gold on unlocking the second slot just yet – wait until you notice what are some of the most requested items / places and then, once you see that you can’t keep up with the production with one single staff member (the best one, which has the most items for producing) then and only then spend Gold on unlocking the second slot.

There will be some pretty easy quests which you can complete and they will reward you with chests, that you can start unlocking for better rewards. There are two main types of quests: the non timed ones, and the timed ones.

The non-timed ones will be shown on the game’s main interface underneath the number of heroes in your village, and you can keep track of them there – but the timed ones you need to actually start on your own when you are ready.

I would suggest that for the timed quests you only start them when you are absolutely ready and have everything lined up for them, because the reward for them is better than from the non-timed ones.

You can find all of the quests that you have in the tab with a chest on it!

Now about those chests that you get from quests: they are awesome! They will contain staff member upgrade points which you can use to upgrade them, along with Gold. The more you upgrade the staff members, the better the items they make (but will cover this more in detail below).

Either way, now try opening as many chests as you can! If you want to, you can spend 1 Gem to open the ones which take 15m to unlock, or 1 Gem to instantly unlock – but for the rest, I wouldn’t recommend it because it will drain all of your Gems pretty fast.

Just try to start always having a box unlocking (at all times) and once you can open it, then don’t forget to do so right away!

Another great thing you can do to the staff members is to upgrade them. You will need to get points for them from the boxes (for each one in particular, not collectively) and when you have enough you can basically level them up!

By upgrading the staff members you can sell their wares for more Gold, which will result in a better profit overall. So try doing that because it is worth every piece of Gold invested!

Every 8 hours you will be able to claim some free in-game rewards! They can be found in the Shop tab, and under the section “Your Offers” you will see the very first one. There you can see your free daily reward, so don’t miss it when it is available.

Also, the Unicorn will appear in the bottom right side of the screen reminding you of it whenever it is available, just in case you missed it!

These would be all of our Hero Park tips and tricks that we have for you right now! Do you know some more fun and useful game tips that you’d like to share with us? Don’t forget to leave them down in the comments section below!