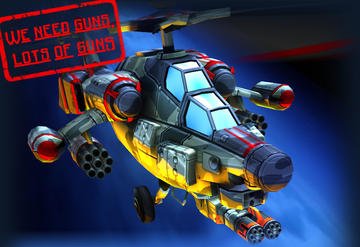 Heli Hell is a game which puts you control of a Helicopter where the main objective is to cause as much destruction as possible while at the same time avoiding attacks from your enemies. It is a vertical shoot’em up genre in which those who play arcade games will be familiar with. Those who play arcade games will also be familiar with having to play a level over and over before advancing to the next stage. In which for Heli Hell, this is the best way to advance through. Read on for more detailed tips in this Heli Hell Cheats: Tips and Strategy Guide.

1. Objectives
Before each level you are given three objectives to complete. The main objective, to pass and move onto the next level is to destroy the boss. You are also tasked with destroying a certain number of smaller targets yourself and collecting a certain number of coins. Both correlate to each other as coins are produced from exploding enemies, so as you shoot one down they will produce coins to collect in which you fly into to gather.

2. Stick or Twist?
There are two main ways to play this game. You can go straight into attack and destroy as many enemies as possible before they can inflict damage, or you can dodge there attacks and focus on keeping out of harm’s way. In order to advance further across the level and reach the distance objective it is best to dodge the attacks and destroy enemies as and when you come across them rather than attacking them straight away. The Helicopters in this game are very quick and nimble this is the main attribute they have. When advancing to later levels you can increase your fire power and then having to avoid attacks will become slightly less of an issue.

3. Health bar
It is important to keep track of your health meter which is at the top of the screen. When your health runs out you will be given the option to respawn, however this will require gold coins. Therefore it is important to collect as many as gold coins as possible as they effectively work as lives. Each enemy will have a health gauge as well, which is represented as a red triangle above them. On occasions they will take more than one attempt to destroy, so make note of how much damage you have inflicted.

4. Awareness
There is a lot going on screen at any given moment, therefore a good strategy to use while playing the game is to focus on your Helicopter and not look too far ahead. This way you can avoid attacks better. The Helicopter will fire at enemies automatically therefore you can use this as a guide as to where the attacks are coming from without getting too distracted. Try to get a balance between firing and avoiding attacks. If you are firing your weapon then you are causing some damage somewhere which will weaken the amount of opponents the closer you get towards them.

5. Power ups
Before the level starts there is an option to use the coins you have collected to buy upgrades. These can come in use when being heavily outnumbered. Be sure to use these when you have a chance, and also time the use of them well. It is best to wait until there are a lot of enemies for these power ups to be most effective. Remember, however coins are also needed to buy lives so make sure you have enough or collect enough when going through the level.

6. Persistence is the key
Unlike other games where you can play one level and then move on this game will more than likely need you to play through the same level more than once. The best way to advance through is to be persistent and collect as many coins and achieve as many objectives as possible. Once you have done this you can keep respawning. It is almost a case of saving your coins for one big push towards the boss. This way you will have more lives and this will give you the best chance to stay in the level long enough to destroy the boss.