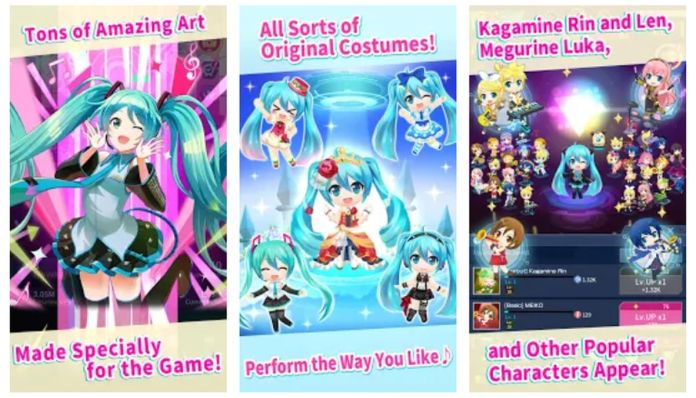 I have to admit, I am not really as invested in the anime culture as others, so I didn’t know much about Hatsune Miku before I started playing Hatsune Miku: Tap Wonder on mobile.

A really interesting concept, for sure – so do check out what the original Hatsune Miku is all about in case you don’t know already. And then come back to check out today’s guide for Hatsune Miku: Tap Wonder.

The mobile game is an incremental clicker that will keep music fans and especially fans of the original character really happy. But even those looking at the gameplay only will be very satisfied, as the game is very complex and has a lot of goodies to offer. A perfect game, in other words.

Now let’s check out some Hatsune Miku: Tap Wonder tips and cheats below to help you learn how to play the game better.

As soon as you start playing the game (or immediately after a re-stage), your main priority should be that of upgrading the power of your taps. You will simply gain more Tap Voltage through tapping at the beginning than from your Figurines.

Also, you need to get the first to Active Skills unlocked as fast as possible in order to help speed up your progress.

When tapping, don’t be shy about using as many fingers as you can. We found out that placing the device on a flat surface – like your desk – and tapping with three fingers works really well and helps you get past those stages faster.

The figurines become important later on

As you go up the stages and unlock more Figurines (the additional girls singing with Hatsune Miku), they become more and more important for your success.

Eventually, you will want to have them get the bulk of your Tap Voltage, being able to beat boss stages (Super Concerts) without your input.

So after unlocking your main character’s first two skills, make it your priority to focus on upgrading the other girls, especially if you don’t want to do a lot of tapping yourself.

How to upgrade figurines in the game?

The Figurines in Hatsune Miku: Tap Wonder are the characters that you unlock with regular currency and they provide Tap Voltage without the need of tapping. Leveling them up in the smartest way possible helps tremendously.

During our play sessions, we learned here at Touch Tap Play that you have to find the right balance between unlocking new Figurines and leveling them up and reaching milestones with the earlier ones.

The thing is that a new Figurine will always give you more benefits than the previous ones will in terms of Tap Voltage gained per money spent. Therefore, for a while, you should focus on unlocking the new ones and leveling them up a few times in order to the best numbers possible.

But later on, you will have to go back to the early ones and level them up to reach their milestones. While they won’t offer too much in actual Tap Voltage figure, they offer other important bonuses.

For example, the first Figurine You Unlock, Kagamine Rin, at level 100 only gives you 18.58k VPS per second. The 9th you unlock, KAITO, gives you 2.38 BILLION per second!

Each Figurine has similar Milestone skills, meaning that you should eventually go back and reach these milestones in order to activate the skills and get better results in the game.

Always equip the best equipment you have available

As you play the game, you will receive all sort of equipment bits that your main character can equip. You can also buy boxes that reward you with random equipment bits or get them from various events in the game.

When you get a duplicate item, it will increase the level of your original. This means that you should regularly check out all your items and make sure that you equip the best ones available.

If you don’t tap often, you should simply ignore the tap voltage boosting ones. We found out that focusing on the items that increase the Tap voltage of your Figurines is best for the first category , for example.

Pets’ skills are active at all times

Unlike items that you can equip, Pets will fortunately give you their strengths and bonuses even if you don’t have them equipped. You can only have one equipped anyway.

But since you get the benefits from all, simply equip the one you like the most. That’s what you will see at all times when playing the game!

Use Hatsune Miku’s skills at the right time

As you level up your main character, you will not only increase her tap voltage earned, but also unlock new skills that you can purchase and use to help you progress through the game faster.

The nice thing about Skills is that they only have a very short cooldown period, meaning that you can use them multiple times in a row. You do need Energy for that, but fortunately you the maximum is pretty high, while recovery time is somewhat decent at 2/second.

Here are the skills currently available in the game and what each one does:

The first three skills are the easiest to unlock in the earlier stages and, as I mentioned before, I think you should focus on unlocking the first two as soon as possible after a reset as they are the most useful early in the game.

You should make sure to use them at the right time, based on your needs. For example, Miku Shout is a great skill to use to quickly beat a Super Concert. You can add the Ensemble or Full Volume as well if it’s a really challenging stage.

On the other hand, the Splash Cheer is best used in the normal stages that you can beat fast, being useful for when you want to hoard up some currency for upgrades.

Guide to the Skill Trees

There are a ton of Skills that Hatsune Miku can learn and I have to admit that all those skill trees seem really discouraging at first.

The truth is that you will have a lot of game time under your belt when you will actually be able to properly invest in the Skill Trees and you will have an opinion formed already regarding the areas you want to invest in.

Put the first skill point in the tapping power first, then wait until you beat stage 250 or so. Only then you will have a few more options available and the opportunity to invest skill points in useful Skill Tree Branches.

There are four different main branches, each with a top of various upgrade options. Each branch focuses on a main element, as listed below:

We found it more useful for the long term and ease of progress to focus on the Warmth skill tree branch and get our Figurines boosted.

Re-staging is the equivalent of prestiging in Hatsune Miku: Tap Wonder. This means taht you reset your progress and restart from scratch, keeping your items and Expansions.

When you restart, you earn Memory points which can be used to unlock and/or upgrade various permanent boosters in the game. You can also earn Skill Points when you re-stage.

You should restage relatively often in the game, keeping your performance in Super Concerts as the main indicator on when it’s the right time to restart. If beating a Super Concert seems impossible or takes a few tries with Active Skills, then it might be better to restart.

At this point, you will surely earn a nice amount of Memory Points to boost your in-game performance and progress faster, making it easier for you to do better the next time.

Should you import new Expansions or upgrade existing ones?

Upgrading is usually less expensive than unlocking a new expansion and at least you know what bonus you’re getting. A new Expansion could prove to be completely useless (or at least not as useful). On the other hand, it could be really good too.

If you are not very happy with the expansions that you have drawn, then you should definitely go for unlocking a new one. We chose to mostly focus on importing new expansions for the first two resets after the tutorial, so that we had a nice amount of options to upgrade.

This has worked well with us, giving us the chance to really improve what needed improved (mainly focusing on more VPS). Therefore, we recommend this method if you don’t really know how to approach this.

Grab the star for added goodies

Every now and then, a rainbow-colored star will fly on the screen: make sure to tap it!

While on most occasions it will give you the option to watch an ad for some random (but great) rewards, sometimes it will just give you a ton of coins instantly. So worth tapping every time you see it – even watching the ads for the goodies!

Unfortunately, Hatsune Miku: Tap Wonder is not an idle game. This means that you don’t collect money and progress through the stage when online. As a result, you must keep the game running at all times in order to progress. This is also why you should focus on improving your VPS from your Figurines.

You can turn the music off, for example, plug the phone in and let it run while you do your thing, making sure to look at it every now and then to purchase upgrades and eventually bet a more difficult Super Concert if the band got stuck.

And this ends Touch Tap Play’s guide for Hatsune Miku: Tap Wonder. If you have additional tips and tricks to share with fellow players, don’t hesitate to let us know by commenting below.