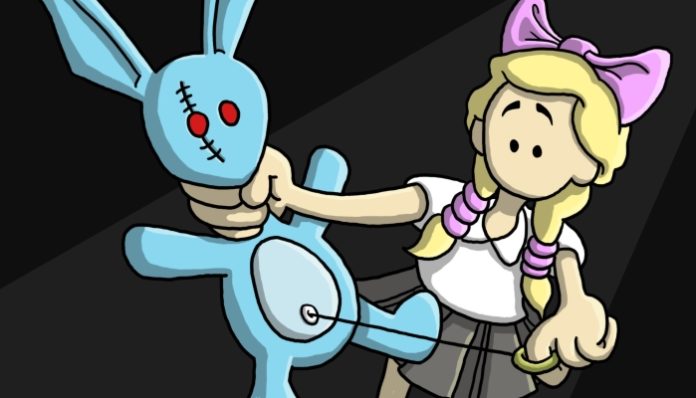 “Hello, adventure game fans. The spyware that we have installed on your computers is telling me that a lot of children are sitting at the monitors tonight. That’s why I won’t be telling the story I had originally planned. That’s really too bad. It would have been a good story, full of entertaining explosions and a giant robot opossum, but also with a lot of expletives and gratuitous violence. The story I’m going to tell you instead is a little different. It is about Lilli, the best-behaved girl in the whole world…”

Lilli is your ordinary, everyday girl. She attends classes at a convent, just like any other normal girl would do. But this isn’t an ordinary world, unfortunately. Lilli just so happened to end up in one of the worst convents in the world, and just about everyone is out to get her. Life is a bit tough for Lilli, to say the least.

Harvey’s New Eyes is the mobile version of Daedalic Entertainment’s 2011 game of the same name. It’s a spin-off to one of their earlier adventure games, Edna & Harvey: The Breakout. 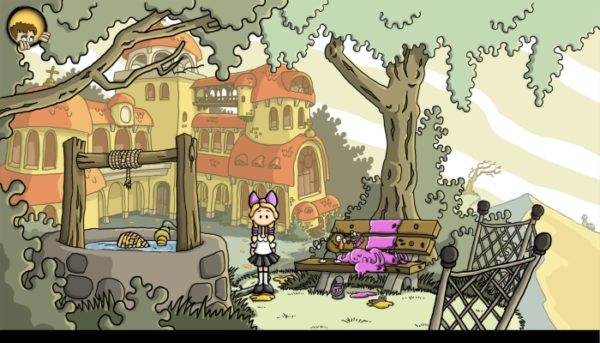 Players are tasked with guiding Lilli, a sweet little girl who just wants to do what she’s told. However, she’s ordered around by the child-hating Mother Superior. Lilli must wander around solving puzzles in true adventure game formula to finish the errands for her all the while taking unfair punishment and abuse from the other kids at the convent.

Without spoiling too much, Harvey’s New Eyes sets its tone pretty quickly the second you see something traumatizing happen. Every time something particularly gruesome happens, Lilli’s “mental gnomes” come in and block out reality so that Lilli doesn’t have to see it. It’s a rather humorous take on potentially dreadful situations, and its the perfect example of Harvey’s New Eyes’s dark humor.

And if that opening quote didn’t already fill you in, the entire game is filled with self-referential, dark humor like that. Don’t let the cutesy and simple art style fool you – Harvey’s New Eyes deals with some heavy stuff in the second half of the game, and you really feel for Lilli. 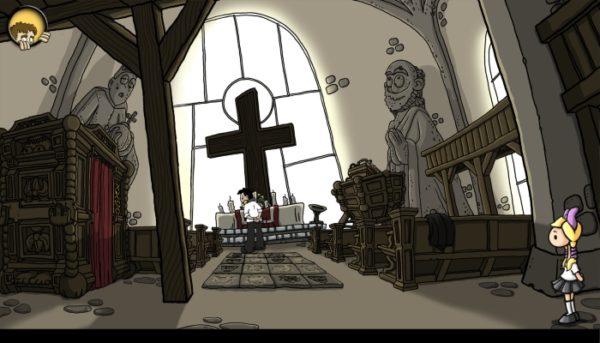 Speaking of Lilli, she’s downright adorable and will attach to you pretty quickly. Lilli puts up with the terrible treatment from the other kids and Mother Superior while still completing her chores. Whenever she talks to someone else, she never ever speaks back in full sentences, instead opting for short squeaks and stutters. It’s super cute and made us want to protect Lilli with everything we got!

Lilli’s errands involve her doing things around the convent, and you will need to use your typical adventure game logic to get through some of these puzzles. They are fairly straightforward, but true to any adventure game there are a couple puzzles that baffled us with its logic. One particular example involves a pizza in the later half of the game, and it was the first instance we needed a guide.

After a major plot development through to the second half, the story gets rather dark and Lilli’s character begins to open up, both gameplay and story-wise. Once you get to the climax, things can unfold in an interesting way, depending on your choices. One specific ending is rather memorable because of a special Lilli moment. 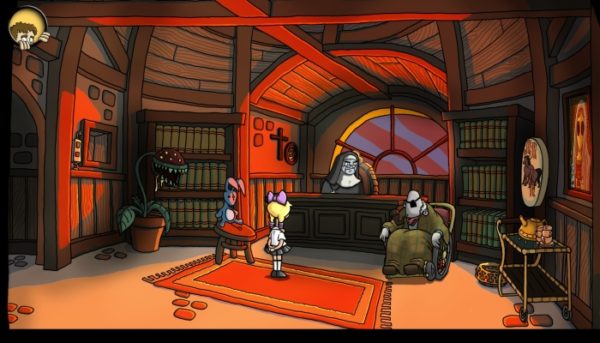 We would love to get into specifics, but that would be getting into spoiler territory, and Harvey’s New Eyes contains a lot of cool surprises and moments. Whether its Lilli’s adorable personality, the increasingly dark humor, or the surprisingly serious story, Harvey’s New Eyes has something for any adventure game fan.

Harvey’s New Eyes is a charming adventure game that will pull you in with its unique mix of simple and dark, which actually fits Daedalic’s other games. Interested in helping Lilli like we were? You can grab the game from the iOS App Store here.