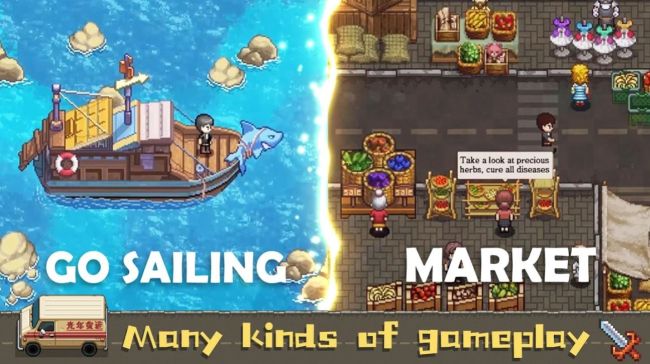 In today’s article we are going to dive into the Harvest Town Occult Cave guide, which will help you get a better understanding of this in game feature and let you explore it to the fullest!

Now you might have seen this feature all over the place or heard about it: “Go farm in the Occult Cave, it gives good loot!” or “Don’t go in the Occult Cave unless you have plenty of bag slots and potions!” and others like this – well, they are all true!

The Occult Cave is basically a mine where you can farm all day as long as you have the resources necessary to keep on going – from energy, to health and items to keep on battling! But if this all sounds too much, then let me start with the very beginning:

The feature will be unlocked after you reached Manor level 20. That means that it won’t be too long into the game, but enough for you to get familiar with all of its features (or most of them at least).

The next morning after you leave the house (after you reached Manor lvl 20) you will get a cutscene which shows Steve Lopez running up to you and telling you about repairing the bridge, so that you can reach the other side of the manor. Then you will be shown a cutscene of the entrance to the Taoist Temple and how there were some noises there.

After all of that happens, you will see the entrance opening and you’ll receive a new weapon from Smith David Hanks. And that is when you can start adventuring into the Occult Cave!

There are a total of 120 levels in the Cave at the moment, and after the game’s Beta phase will end there will be available more (as far as I know). Now every 10 floors there will be a Cave Merchant which will offer you goods, so if you see anything that you want to purchase, you can do so here.

The more you advance through in the Occult Cave, the better the items will be, but the challenges more and more difficult. The monsters that you encounter will get tougher, so you will need to prepare better equipment the more you advance.

Encounters in the Occult Cave

There are quite a few types of encounters that you can run into, so let me go through all of them and tell you what each and every one of them will do:

– Diary Lock Box / Ancient High Tech Password Box: We’ve made an entire article dedicated to this, and you can find all of the Diary Lock Box passwords here! That should help you get a better understanding of them and also help you unlock them.

– Diary Pages: Like in the previously explained paragraph, these are the pages containing the password for the Diary Lock Box.

– The Snake Statue: This is a statue which will be randomly encountered and if you answer its question correctly, you will receive a reward.

– Monsters: They can be fought and the more you advance, the tougher they get. The monsters will drop Dark Essence, which is the currency that you can use at the Cave Merchant to buy various goods.

– Random wooden boxes: These are some fairly normal wooden chests which you can break with the Pickaxe. They can be found randomly in the cave and they contain random equipment.

– Skeleton Corpses: Just like the wooden boxes, they can be destroyed by using the Pickaxe. They can be looted and you can discover various rewards, such as Coins, equipment or Potions.

– Crops: The wild crops growing in the Occult Cave are a really great source of income and much more. Depending on the season that you are at in the game, and the floor that you’re fighting in, the crops may differ.

– Bosses: There are also some bosses that you will encounter – they are slightly more difficult than the normal mobs (obviously) but they will also drop better stuff. I suggest that you are well prepared with potions before every encounter.

You know the statue that you can encounter randomly all throughout the cave? Well, you might wonder which of the answers shown is correct. And that is exactly what you will find down here below!

Q: At which Cottage level is cooking feature?
A: 3

Q: Which item is require to eradicate the Mucus?
A: Bomb

Q: Which of the following will reduce the mood of Animal?
A: Lock Animal Inside

Q: Which how many hearts can a NPC be married?
A: 10 hearts

Q: Who will do mountaineering weekly no matter?
A: Chris Trump

Q: At which floor will not the Cave Merchant appear?
A: 103rd

Q: How many kinds of Antiquities can be donated?
A: 52

Q: Which plant will not wither during season change?
A: Red Banana Tree

Q: How to gain the Flower of Love in Legend?
A: Make friend widely

Q: The business hours of the Horse Farm are?
A: Weekday

Q: Which fish won’t appear at the town?
A: Piranha / Dace

Q: Which is Elly Cole’s favorite book?
A: Gone with the Wind

Q: Which is not contained in the Visiting Box?
A: Weapon

These would be all the Occult Cave guidelines that we can help you with! Do you know some more useful game tips and would like to help the others? Feel free to leave a comment down below or if there’s something else you want to learn, let us know!