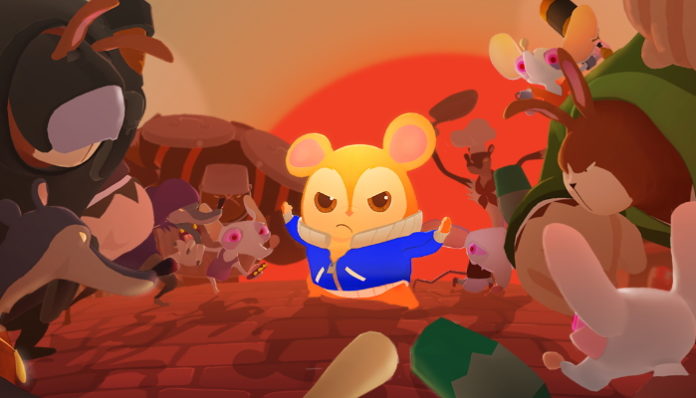 Hamsterdam is a quiet, peaceful town full of friendly residents. Pimm, the young hamster lives humbly with his former hamster-fu master Grandpa. However, the sinister chinchilla mob boss Marlo is bringing his goons into town, and they have taken Grandpa hostage! Now, it is up to Pimm to rescue Grandpa and set things right before Marlo has all of Hamsterdam under his control!

Hamsterdam is an all-new arcade brawler from Muse Games, the minds behind the wonderfully creative Guns of Icarus Online and Creavures. Their games always have a certain unique flair to them, and Hamsterdam is no different with its bright and colorful characters.

As soon as you start up the game, Hamsterdam hits you with its 80’s buddy cop inspired soundtrack, full of funky beats. The music is perfect for beating up the Vermin Gang, and the icing on the cake is Pimm’s original outfit being a simple blue track jacket. After a brief introduction, you are thrown into the first fight.

If you took the intricate combat system from Rocksteady Studios’s Batman: Arkham series and made a game solely based on it, you would end up with Hamsterdam, as it is all focused on precise attacks and rhythm-based timing. You can button mash if you want, but it is much more effective to fight with timed attacks!

When a battle starts, Pimm will be on the right side of the screen. A simple button press will make him launch an attack on the nearest enemy, and as he rears back, he will glow to signify the correct timing for another attack. Chaining attacks together will make Pimm perform a perfect attack, which deals increased damage.

However, the Vermin Gang are not going to just sit there and take it! Enemies will launch attacks of their own, which is communicated through a white glow. To counter attacks, players must move in the direction of the enemy and Pimm will disabled them, preventing their attack.

As Pimm beats up ruffians, his KO meter will charge. Once fully charged, Pimm can unleash an extremely powerful KO attack that is capable of instantly knocking out enemies. Pimm will also come across enemies that have protection on, and he will need to utilize charged attacks to penetrate their defenses. Some enemies will also perform “rush” attacks on Pimm, which are basically mini quick-time events.

Sound like a lot to keep track of? It is – but that is also exactly why Hamsterdam’s combat is so satisfying and rewarding. Once you get the hang of Pimm’s arsenal of moves, you will be able to string together attacks and combos smoothly. When you hit that zone – where you are effortlessly comboing like it is second nature – combat flows like a dream and you will feel like a true master of hamster-fu!

Each level has three stars to earn on it, much like a standard mobile game format. Clearing a level will reward you with seeds that you can spend on new clothes and accessories for Pimm, with some even granting him new abilities and perks. Some new mechanics are introduced through these clothes, giving you even more skills to beat up those rascally vermin!

At the end of each zone, Pimm must come face to face with one of Marlo’s top goons. The action takes a bit of a shift here, as the boss fights in Hamsterdam are more focused on dodging and reflexes. While the boss battles are a nice change of pace to shake up the action, they tend to drag on a bit. Bosses are split into “phases,” much like a typical The Legend of Zelda boss.

That is to say, you have to wait for your opening to strike, then when the boss is stunned, you let loose a flurry of attacks. The bosses speed up when they are injured, and the closer they are to total defeat, the faster they move. The patterns tend to change very little if at all however, so what ends up happening is a rote memorization of the same attacks, only speedier. It is exhausting after a while rather than challenging.

Hamsterdam also seems to have a sort of loading problem. When you first boot up the game, there is a loading screen before you get to the title screen. When you press start, the game has to load again. There is loading between each level, and while the load times are not too bad, it is so frequent it does bog down the pacing of the game a bit. We played the Nintendo Switch version, so we are not sure if it is the same experience on other platforms.

Aside from that, Hamsterdam remains an action-packed arcade brawler that is well worth the entry fee. Hamsterdam is available now on the App Store, Google Play Store, Nintendo Switch, and Steam.