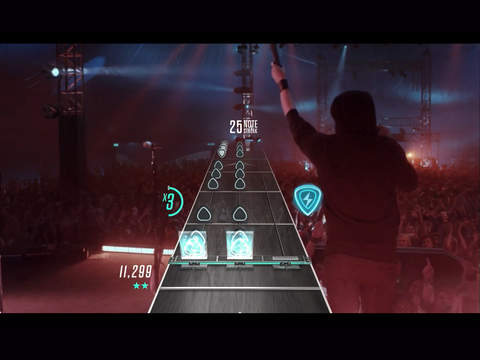 Some time ago the new entry of the Guitar Hero series called Guitar Hero Live has been released on a variety of platforms, including iOS devices. The iOS version of the game plays pretty much like the other console versions but the high price of the game definitely put off more than a few gamers. From today, more players might consider taking a lot at the game, as its price has finally been reduced to a more reasonable one.

From today, Guitar Hero Live can be purchased for $9.99 instead of $49.99. Unfortunately the price drop is only temporary but players have until January 7th to take advantage of this promition.

On a related note, a new Guitar Hero Live update has been launched for the iOS version of the game adding real time multiplayer and more.

What’s New in Version 2.0.0
· New GHTV progression system that allows you to rank up and unlock additional upgrades
· The GHTV multiplayer totem allows you to compete in real time with other players
· Access to the GHTV song catalogue “On Demand” using Plays
· Earn coins to spend on Hero Powers, Plays and Guitar Upgrades to get new high scores
· Purchase Hero Cash to quickly get more Plays and hammer out those tricky guitar solos
· Access individual song goals to master your favorite tracks

Guitar Hero Live is now available in all regions on the App Store.