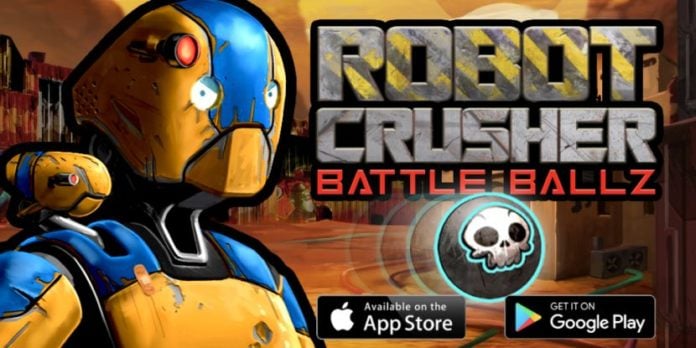 Currently available to download for iOS and Android, Robot Crusher Battle Ballz is the latest spin on arcade pinball to land on mobile. This isn’t just a two-button game though. Far from it. BigBoyPants Studios’ adaptation offers up enough new tweaks and twists to keep any budding skill-master engaged.

In this beginner’s guide we cover the rules of the game, how they’ll likely affect your play style, and some context to the game’s futuristic world. Let’s dive in…

A far-future setting full of robots needing to be crushed

Set in the year 2742, Robot Crusher Battle Ballz takes place in a version of Earth where mechanised robots are many but have become obsolete. The only solution is to crush them as part of a televised competition – and that’s where you come in.

As Tahi, a retired peace corp officer, it just so happens that the top boss running the show is an infamous robot known as The Grand Orb. He’s been linked to a recent terror attack, so it’s up to you to blow past the competition and win in order to take him down. What follows is a four-lane contest of mecha destruction.

Simultaneously manage 4 lanes’ worth of destruction

Almost anything goes within the world of Robot Crusher Battle Ballz, but your main objective while playing is to be the first robot to clear out four lanes.

You do this by timing your pinball shots accordingly to take out anything blocking them, dodging and avoiding such obstacles as explosive crates, freeze gate tech and harmful bombs – or using them to your advantage.

The robot that wins three rounds first will take the win, edging ever closer to becoming the Crusher Cup champion and earning the right to crush your opponent flat. Flatten as many robots as possible in all four of the lanes lying before you.

While using REMOVE, your right thumb controls the pinball booster power, which you combine with the many useful power-ups activated by the left thumb.

Speaking of power-ups; each round win will see you earn a bunch of credits that can then be spent in the in-game Hologram shop. Here you’ll find such useful abilities as Lane Reloads and Lighting, both of which will help give you an edge during the heat of battle.

As you progress up and up the ladder, you’ll need to account for the same power-ups being used against you by your many bot foes.

Thankfully, if you manage and use yours correctly, the challenge will remain fair while still being largely based on skill. It won’t be long before your booster rig transforms from basic to battle-hardened.

Multiple difficulty modes for you to test your metal

Those worried about Robot Crusher Battle Ballz’ learning curve can rest easy, knowing that the game starts off relatively simple at Bronze level difficulty. Here you’ll be able to learn the basics of crushing bots in the various lanes, before it ramps up and pits you against various bosses and explosive challenges.

Complete the Bronze tier and you’ll be gifted with 10,000 credits to spend. Use them wisely, however, because the Silver and Gold difficulty levels more closely resemble how Robot Crusher Battle Ballz is meant to be played. It’s a full-on battle for survival, where the weakest bot is sure to be crushed.

Fancy your chances at becoming the Crusher Cup champion? Prove your worth by downloading Robot Crusher Battle Ballz today on either iOS or Android.