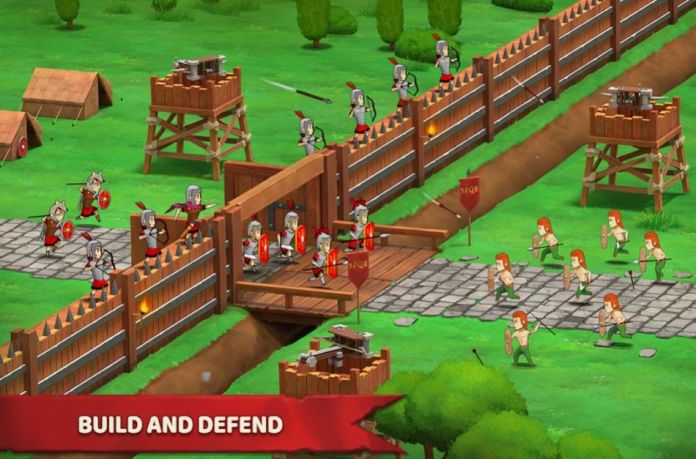 In our article today we are going to tell you everything that you need to know about Grow Empire: Rome and share with you all of our Grow Empire: Rome tips and cheats to help you build a powerful fortress with strong soldiers.

This is a pretty interesting game, as it will let you test your strategy skills and test how well you can plan your battles. It’s a very catchy game, so you might find yourself loving it more than you thought – I for one did!

So, without further ado, here are our Grow Empire: Rome tips and tricks to help you build the best city fortress out there!

In the top right side of the screen you will have a button which looks like a play button and if you tap it it’s going to speed things up a little. I suggest that you always have it on, because it’s much better than to wait full time for the cooldown to reset.

I have found that this helps me pass the levels much faster and it is also less annoying than having to wait for so long for battles to unfold.

Select the right soldiers to fight

At start you won’t have much of a choice, but later on you can choose which soldiers you want to send out to counter the enemy troops. I suggest that you pick countering soldiers, because some have weaknesses against others.

– Archers are strong versus Spearmen, but weak against Cavalry.

– Cavalry are strong versus Archers, but weak against Spearmen.

– Spearmen are strong against Cavalry, but weak against Archers.

– Swordsmen don’t have any strengths of weaknesses against other types of units.

If you want to see which troops the enemy sends out you can check them under the wave bar on top side of the screen.

You can upgrade so many things in the game, but it’s important that you do these upgrades in the right order because that way you will maximize the bonus you get. This is how I suggest that you make the upgrades:

– Upgrade the wall to level 10 as fast as possible, then upgrade the Archers as much as you can in the meantime.

– Add a few points to the Towers.

– Try adding all of the points into Wall, because it will increase its durability and it’s better overall if a couple of units will make it through, to make their job more difficult.

I personally like to believe that the order should be something like this: Walls -> Archers -> Towers -> Catapults. This works the best for me, as I don’t really use the catapults all that much (only in the Elephants levels mostly) and by having strong walls, it helps with defense quite a lot.

So in my opinion you should upgrade the Walls as much as you can then focus on upgrading the Archers.

Whenever you level up, you will receive XP points which you can spend in the General tab. Depending on how you play, you can choose to level up skills that synergize very well with how you want to deal with the game.

I like the Wall Archers Damage and Wall Archers Range leveled up, as they go very well with the fact that I upgrade the Walls and Archers the most. This helps deal with incoming enemy troops even if my soldiers are dead or on cooldown. Try this out, and if you like it, keep upgrading the Archers and spend points in making them even more powerful.

Every now and then you will be able to watch a short advertisement to claim some gold. This is available about every 3-5 levels and the gold you get increases, the higher you advance.

I suggest that you watch it and claim all the gold that you can because it will help you level up your units and upgrade your soldiers.

In the Map tab you can see some territories and their levels. You can start at level 1, 2 and go up to quite a lot. This is good for earning passive gold by the minute, because the more you conquer and upgrade, the more gold you will get.

Each of the conquered territories can be upgraded to level 5 maximum, so I suggest that you do it whenever you captured it. Also, this is a great way to make profit while you are not in game, because it will count towards your offline earnings too.

For my play style, I have indeed found the best combo to help me defend the city under any circumstance. Firstly, I have upgraded the wall as much as I could, while also keeping the Archers somewhat leveled up.

At the moment my wall is level 40, and the archers level 30, and that works really well with the General’s Skills which I have chose (Wall Archers Range and Wall Archers Damage). Along with these static units, I have also leveled up the Spearmen and I am sending them out to fight all the time, even if they don’t counter the incoming enemy.

I have decided to do this as a test, and it turns out that the Spearmen have a very good HP, so they can tank quite a bit. This gives the Wall archers enough time to take down any enemy that approaches the fortress.

Oh, and if you also tap on the War Cry and Ballista arrows, then you can take down any enemy before it reaches your gates.

These would be all of our Grow Empire: Rome tips and tricks that we have right now! Do you have other sieging techniques or suggestions? Share them with us down in the comments section below!