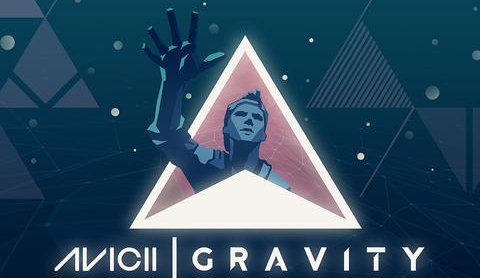 Featuring the music of acclaimed Swedish DJ Avicii, Gravity is a novel twist on the endless runner genre, and will likely appeal to fans of similar games such as Temple Run and Sonic Dash, with its hypnotic music, distinctive graphics and simple yet compelling gameplay.

The concept behind the game is elegantly straightforward: you control a spacecraft and must guide it through a triangular tunnel which curves and winds its way through a wireframe alien landscape populated with plants, caverns and buildings, all rendered in an abstract style which brings character to the game and, for those with long memories, is highly reminiscent of 1980s titles such as Zarch or Elite. You can flip your craft around the three sides of the tunnel and must do so in response to the presence of rapidly approaching obstacles which take the form of other craft, walls and variously-coloured triangular shapes.

It is these shapes which form the focus of the game, as you are required to hit those of a particular colour in order to rack up the points, with penalties for hitting the wrong colour in the sequence and bonuses for longer chains of the correct colour, which also increase your craft’s speed and of course the game’s difficulty. Obtaining bonuses provides credits which allow other ships to be unlocked and power-ups to be added to your craft, such as score multipliers, boosts and shields. Progression also allows for the unlocking of a game-exclusive mix of an Avicii track, while other tracks are available for purchase and which will be accessible via your iTunes library.

Perhaps the game’s most distinguishing characteristic is its use of Avicii’s music and the way it reacts to your progress. As your craft speeds up by making chains, so too does the music, which increases the pressure on the player and adds greatly to the challenge. It is a simple yet highly effective gameplay mechanic which really adds to the game’s appeal and allows it to stand out from the competition.  The rest of the sound design takes a minimalist  approach however, with basic spot effects for your craft’s movement, explosions and other similar actions. The controls are responsive and easy-to-use, requiring only a simple swipe in the appropriate direction, making it perfect for on-the-go gameplay, while the interface is clean and uncluttered, again evocative of the 1980s through its choice of fonts and colours. As previously mentioned, graphics are unusual and lend the game its unique old-school character, but might not impress those players more accustomed to flashier games such as Asphalt 8 or Infinity Blade.

Overall, this a worthy addition to the genre, with the inclusion of Avicii’s music creating a mesmerising , addictive experience that is perfect for quick bursts of gaming and which provides that elusive one-more-go quality which is often so lacking these days. Gravity is available now for free on the app store.