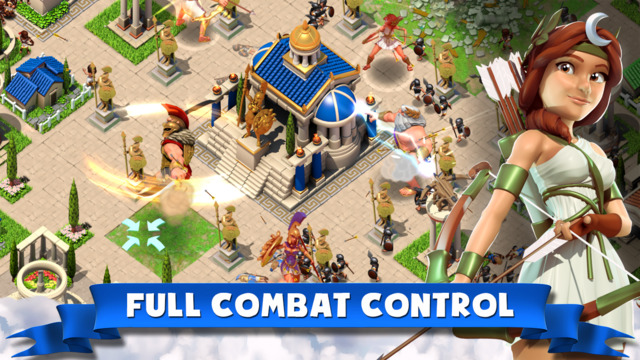 Are you ready to head back to Olympus? We’re back with another guide on Gods of Olympus! Today, we’ll be sharing a couple tips on how to earn a lot of gems. Gems are the premium currency of this game, so they’re useful for quite an amount of things. Let’s get started with our Gods of Olympus tip guide on how to make more gems!

Opening the side bar will bring you to the achievements list. Each achievement is split into three tiers, and the more you complete the same achievement, the more gems you can get! It goes from 10, to 20, then to 30. Complete as many of these as you can to start racking in a ton of gems! These achievements are things that you will naturally accomplish as you play through the game, so don’t worry about going too far out of the way to get these done.

Early on, you’ll be able to build a fountain. The fountain is a decoration-type building that produces one gem every ten hours. It sound slow but if you’re on the ball about collecting them every time they’re available, it’ll be a lot in the long run. As you level up, you’ll unlock additional gem-producing buildings so be sure to build as many as you can.

After you’ve leveled up a couple of times and you’ve built some of the gem production buildings, be sure to check back on the game every so often. You want to ensure that you have gems constantly in production. This means that you’ll need to collect your gems the second they are completed. Make sure you enable notifications for the game!

When you search for an opponent to fight, try testing your might and selecting Hard. The stronger your opponent’s base is, the more experience you’ll gain if you win the battle. You will earn a couple of gems every time you level up, so it’s in your best interest to fight as many hard battles as you can. Of course, you have to balance it! Don’t bite off more than you can chew otherwise you’ll just keep losing. Make sure to level up your gods!

5. Be sure to use your nectar!

“Nectar” is this game’s source of energy. It replenishes over time, so make sure to spend it as much as possible. Remember that even if you lose an attack on another player, you’ll still be rewarded with gold and stone equal to the amount of damage you’ve done, so it’s always worth it to try to fight as much as you can.

That’s all for Gods of Olympus! If you have any other gem-producing tips or tricks to share, leave a comment below!