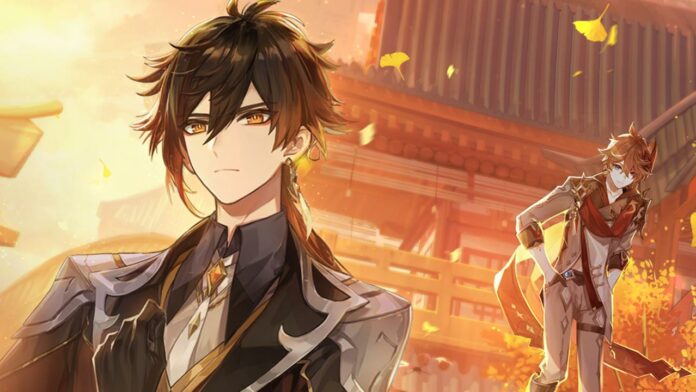 Genshin Impact has taken the gaming world by storm, becoming the mobile game that even those who hate gacha mechanics can enjoy without spending too much real money. The game developed by miYoHo is now set to be expanded considerably in just a few days.

Today, the developer officially announced the 1.1 update, called A New Star Approaches. The update will be released on iOS, Android, PC and PlayStation 4 on November 11, and it will bring four new characters, new quests, the game’s first seasonal event and a new Reputation system for each region currently available in the game.

Childe promises to be a very interesting character. Releasing as a 5-star hydro charavcter, Childe will be the first character able to switch between melee and ranged attack, offering a level of versatility that no other character in the game currently possesses.

Zhongli will also be a 5-star character, but he will be considerably less versatile than Childe, as he will be a geo element, polearm wielder that will focus on area of effect attacks. He will come with rather high defense, so he will be able to take quite a beating in battle and survive.

Xinyan and Diona have yet to be detailed in full, but it has been confirmed that they will be 4-star characters.

The new quests included in the 1.1 update have yet to be detailed in full, but it has been revealed that they will bring a close to the Liyue chapter. Additionally, there will be more character-specific quests that will let you know more about them while adventuring.

The Unreconciled Stars will be the first-ever seasonal event for Genshin Impact. The event will last for two weeks and it will feature new quests, co-op challenges and tons of great rewards, including the 4-star character Fischl.

The Reputation System looks to be the biggest addition of the 1.1 update alongside the four new characters. This system will give players a separate rating for all of the game’s cities, a rating that will increase as players complete the activities inside each regions. Once reputation is high enough, players will be rewarded with some region-exclusive rewards, including some brand new items.

Plenty of new items are going to hit Genshin Impact with the new update. Among them are a portable waypoint, portable stove, treasure compass, oculus resonance stones and a Wind Catcher which can be used to create wind at will at any time, opening up some new exploration possibilities.

Last, but not least, the Genshin Impact 1.1 update will introduces a new monster called the Forrest Hillichurl. This monster is actually a cameo of the miYoHo president Forrest Liu, on who players can vent out their frustration about any of the game’s mechanics and current issues. A very nice way to prevent the real president from getting hurt by a mob of angry players!

The Genshin Impact 1.1 update releases on iOS, Android, PC and PlayStation 4 on November 11.