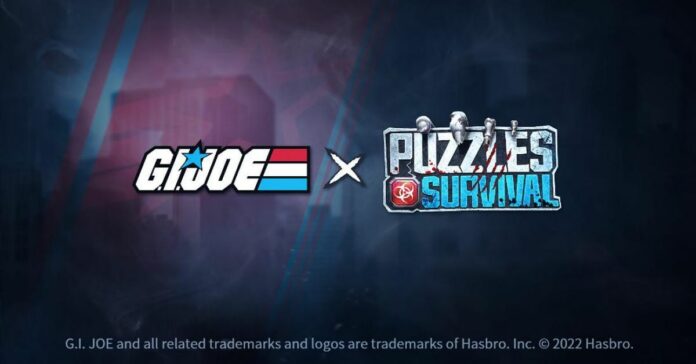 Puzzles & Survival, a zombie-themed match-3 strategy game launched by 37 GAMES, announced today that it will team up with Hasbro, Inc. to bring G.I. JOE to the game on May 6.

Upon its launch in May, this limited-time collaborative event will pit players against the evil forces of Cobra over the course of six exclusive events, all while still striving to defeat the zombies that have become part and parcel of daily life. In doing so, players will have the chance to engage with the characters that have made G.I. JOE such an iconic action hero brand and enjoy the stunning visual effects and thrilling gameplay that the limited-time event will offer.

Of course, such an exciting crossover event would never have been possible had it not been for the extraordinary dedication of both the game’s fans and developers. Their zeal and enthusiasm are doubtless responsible for the game being the subject of many App Store and Google Play recommendations, which cumulatively led to the game being downloaded over 38 million times. As if that wasn’t enough, the game also won the SensorTower APAC Best Gameplay Innovation Award in 2021, a well-deserved feat in light of the remarkably innovative spirit that compelled the developers to partner with household names in the first place.

Now you know that G.I. JOE is coming to Puzzles and Survival- and, after all, knowing is half the battle- make sure not to miss out on the opportunity to save the world this May. In the meantime, be sure to download the game now and enter the gift code [PNSGIJOE].

G.I. JOE is a trademark of Hasbro used with permission.

Hasbro (NASDAQ: HAS) is a global play and entertainment company committed to making the world a better place for all children, fans and families. Hasbro delivers immersive brand experiences for global audiences through consumer products, including toys and games; entertainment through eOne, its independent studio; and gaming, led by the team at Wizards of the Coast, an award-winning developer of tabletop and digital games best known for fantasy franchises MAGIC: THE GATHERING and DUNGEONS & DRAGONS.

The Company’s unparalleled portfolio of approximately 1,500 brands includes MAGIC: THE GATHERING, NERF, MY LITTLE PONY, TRANSFORMERS, PLAY-DOH, MONOPOLY, BABY ALIVE, DUNGEONS & DRAGONS, POWER RANGERS, PEPPA PIG and PJ MASKS, as well as premier partner brands. For the past decade, Hasbro has been consistently recognized for its corporate citizenship, including being named one of the 100 Best Corporate Citizens by 3BL Media and one of the World’s Most Ethical Companies by Ethisphere Institute. Important business and brand updates are routinely shared on our Investor Relations website, Newsroom and social channels (@Hasbro on Twitter, Instagram, Facebook and LinkedIn).