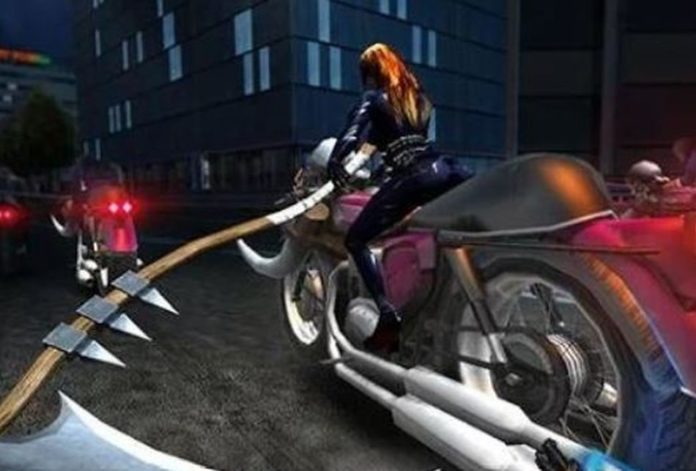 For the fast-paced racers and adrenaline lovers, these Fury Rider tips and tricks will reveal to you how to defeat the more difficult riders, as well as how you can gather lots of money to unlock all the strong equipment you want!

All of the features this game offers can be unlocked by simply playing the game, so even if it seems a lot at the beginning, don’t worry about it because the money will come faster than you think by following our Fury Rider cheats! So, without further ado, let’s get right into it! 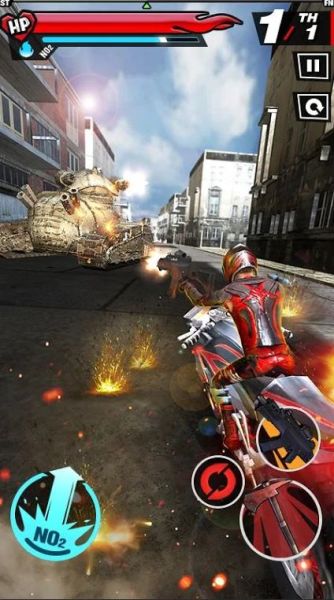 Take down enemies to score high!

Always try to take down as many other riders as possible while keeping yourself safe. This is the best way to ensure your win, and to maximize the rewards you get for passing a level. That’s not as easy as it sounds for the later levels, but if you constantly upgrade your rider and weapons to the best ones, it’s going to make things a lot easier.

Usually, the more people you take down, the better the rewards you’ll receive, so stay focused on the level objective while also trying to score a few other kills. 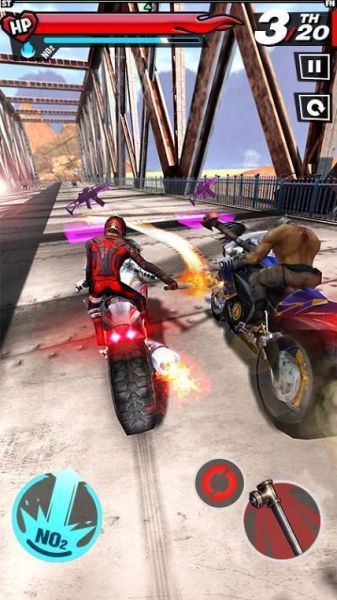 As I mentioned before, this is going to help you by a lot in the later levels. The challenges will keep getting harder and harder, and you are going to need to get stronger. For that, there are three things you can improve: the motorcycle, the rider and the weapons.

The only thing different about each and every one of them is the looks (you can easily tell which ones are the more badass-looking ones). Other than the looks, in what regards their usability, they can all be upgraded to have the maximum Speed, Acceleration and NO2, so here you only need to worry about which one you like most.

Death Moto: This is the starting bike, it’s pretty basic, but it’s not much different than the others in what regards the stats.

Dark Angel: Is an interesting-looking bike that costs 3000 money, but I don’t suggest investing in it since it doesn’t have anything too special about it.

Tron: You most definitely know where its name comes from once you take a look at it. This one also costs 3000 money, but it’s way better than the Dark Angel.

Ghost Ride: Definitely my favorite one, and probably yours too. It has the best overall stats (which means it doesn’t require a lot of upgrades) and its looks alone will make your enemies falter and leave the road. Certainly worth investing in it, so go ahead and get it if you can! 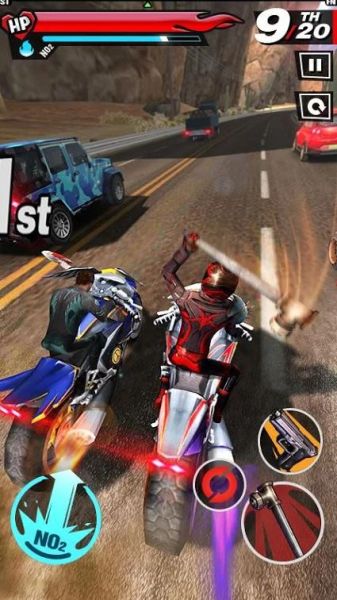 They all come with their own weapons, which you can not buy from the weapon tab, so you can either choose based on their power, or based on their looks (which is what I did). They can also be upgraded, just like the motos, and will give more Attack and HP.

Tom: This is the basic rider you’re starting the game with. Tom is a decent one, but his weapon is not the best, so I suggest changing him as soon as you have collected the money.

Eddie: He is OK, and has slightly better stats than Tom. If you’re fond of Eddie’s mohawk or nailed bat, then it is good for a first change of characters. I would however save the money for Belle. 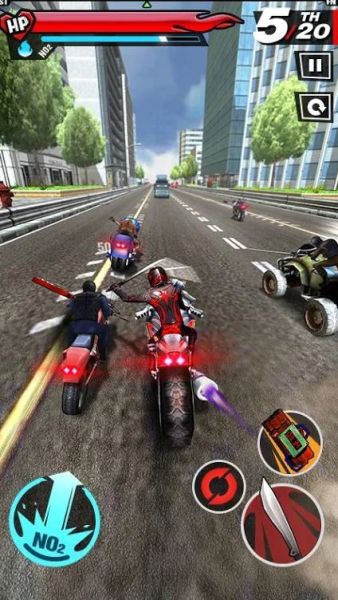 Lola: The half-naked girl on a bike. She’s rocking a bloody guitar (literally) and if you like that, you can definitely go for her.

Belle: Belle is the best one in my opinion, because her basic Attack is the highest and she looks like she knows her stuff pretty well. Also, she’s wielding a scythe, so that gives her another 100 points to the cool-looking chart. I suggest upgrading to Belle as soon as you can, since she is the one that will require the least upgrades later on.

Wolf: This cool-looking guy is a killing machine on 2 wheels. He has an electric saw and he’s not afraid to use it. His Attack is slightly lower than Belle’s, but his HP is higher than hers, which makes him more tanky overall.

These are the weapons that your rider will have along with their own weapon. These can vary in shape and size, but you need to keep an eye on their range and damage, since that is what you’ll need basically. They can not be upgraded, so the one you choose is what you’ll be having throughout the game.

Axe: The axe is not amazing, but for start it’s doing its business well.

Pipe: The pipe is what the game will make you buy, so you don’t really have a choice. It’s OK for the first levels, but try to change it as soon as you’ve changed your rider.

Wrench: A big old rusty wrench in the face is what will make the enemies fall. The weapon is fun to play with, but its damage is the same as the pipe’s, so it’s really not worth investing in. 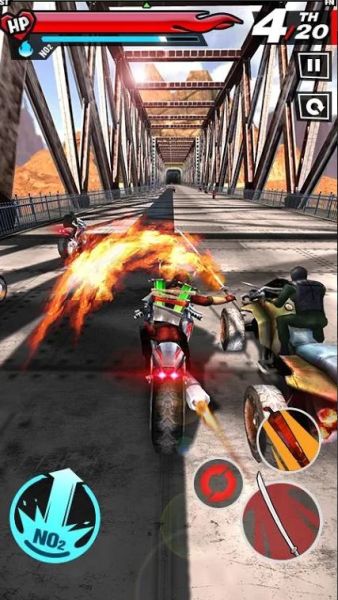 Shovel: This bloody shovel has a big range, so it’s a good weapon to buy at start. If you have some spare 600 money to buy it, go ahead and do it (or use it for the Katana).

Katana: My early game weapon of choosing, it’s got a big Range, while it’s not lacking much damage-wise. It looks extremely good on Belle, so bonus points there.

Hammer: it’s a big sledgehammer that I have no idea how they’re carrying on a motorcycle. Oh well, it’s super strong, so if you have the money for it, go right ahead and buy it.

Fire Drant: As much as I’d like to see the riders spraying the enemies with water or shooting fire at them, this is not how it works. The fire drant will just act as a weapon; a funny looking one.

So to conclude this, I suggest first upgrading your rider (preferably to Belle), then going for a good weapon and last (but not least) you can change the ride (my favorite is Ghost Ride). You can do as you prefer, but these are my suggestions here.

Go on an endless ride

As soon as you pass level 5, you can choose to adventure into the streets to fight other riders, collect goodies along the way, or simply enjoy a chill ride. This mode is endless, which means there is no set objective for you to follow, and it will end once you die.

If you are looking to just enjoy the game and collect stuff, maybe even try out new weapons, this is the mode for you. 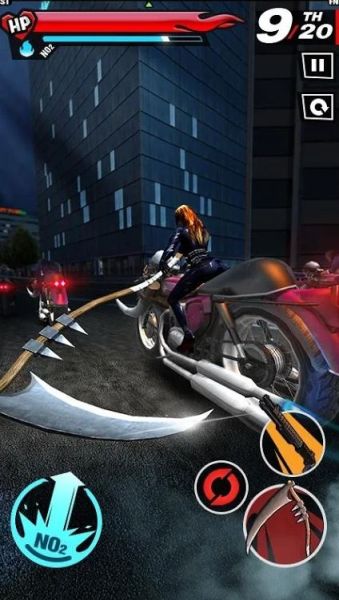 Every day you log into the game, you will be rewarded some new cool things. Always make sure you log in and collect them, even if you don’t intend of playing that day.

This is especially good if you don’t have time to play only during the weekends for example, because you collect the money from these rewards and once you’ve logged, you can buy something with them. 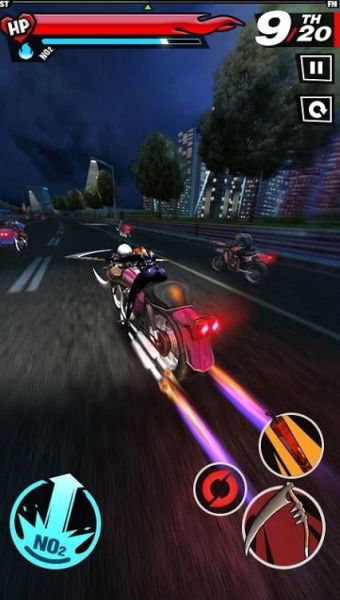 To easily take down the riders, try running them into a wall while attacking them. This will not only slow them down, but make them easier to hit also. It’s great for when you see some heavy traffic around, because they will normally try to avoid hitting other cars, so that’s when you can try to act because you can simply map in your head which way they’re headed.

You should also collect all the stuff you see on the roads: pistols, shotguns, etc and use them wisely. Since they have a limited number of bullets, only use them when you have a clear view of the enemy. 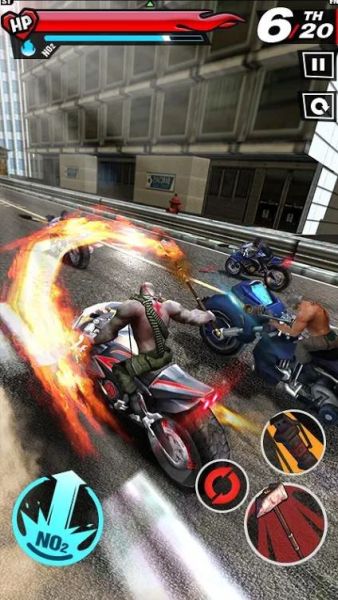 Another (a little more difficult) technique you can use to take down the enemies is to use the NO2 to get right behind them or next to them, and attack them before they can strike back. This is a bit more difficult to pull off, but it’s quick and deadly.

These would be all the Fury Rider tips and cheats we have for now, but if you know something cool and helpful that we haven’t mentioned above, leave a comment down below for everyone to see and learn!